Dutch poet on the brink of international acclaim 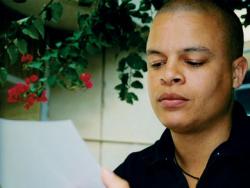 AWARD-winning UCT-based Dutch poet Alfred Schaffer, though still in disbelief, is celebrating the news that his second volume of poetry, Dwaalgasten (â€œwandering guestâ€) has been nominated for two prestigious poetry awards.

Schaffer has been short listed as one of the five possible contenders for the 2003 VSB poetry prize, and he faces stiff competition from some of Holland's more renowned poets. The prize is awarded to the best volume of poetry published in the previous year.

â€œThe prize has been around for about ten years and it is a major event, Schaffer said. In April and May there are poetry readings in and around Amsterdam, special music is composed to accompany your work, and even though you are a nominee you receive a lot of attention.â€

Surprisingly, Schaffer is quite adamant that he will not win the VSB laurel. â€œI am only 29 years old and there are older artists whose work is more mature,â€ he explained.

â€œAbout 80 artists who are either Dutch or Flemish send in their work and to be picked from such an enormous bunch is enough for me, I am very honoured. I am not sure what I would feel if I would win now because I feel that my work could be better in years to come,â€ he added.

Though hesitant at the prospect of winning, Schaffer does admit that the R250 000 prize would be welcome. Schaffer also is a strong contender for the Lucy B. en C.W. van der Hoogt poetry prize. As for his second nomination, Schaffer is still speechless, having only received the news five minutes before this interview.