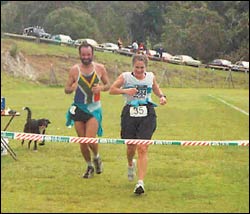 Up hill and down dale: UCT's Jean-Paul van Belle (left) and Hout Bay Harriers' Monique Beattie coming in to cross the line during the inaugural St Helena Festival of Running marathon. Both won gold medals with times of 04:42:03.3 and 04:42:03.9, respectively.

Island grave of Napoleon, the location sits in the middle of the vast mid-Atlantic. But it provides the venue of probably the world's remotest road marathon. The journey to St Helena alone takes five days' continuous sailing from Cape Town, the nearest port.

The island also features an average road gradient of 7% - small wonder there were only 10 starters and six finishers in last month's St Helena bi-annual Festival of Running, which included (for the first time) a full-length marathon.

"The event is billed as the most remote marathon as the island lacks a landing strip and can be reached only by ship," said information systems senior lecturer Jean-Paul van Belle, an endurance athlete, who assisted the islanders set up the first event in 2001. He is also the titleholder of the first marathon.

Four of the 10 runners dropped out at the half-marathon mark, which left only three men and one woman to finish the race. The first man to cross the line was local "Saint" (as the islanders are dubbed) Errol Duncan, gold medallist of several athletic events in the Island Games.

"It is testimony to the toughness of this marathon that Errol took four hours, seven minutes and 46 seconds to complete the course, although he is normally a sub three-hour marathoner," Van Belle said. Second man home was Van Belle with a time of 04:42.09, and the third was UCT doctoral student (geology) JaÃ§ek Stankiewicz on 05:22.18. Stankiewicz narrowly missed a gold medal in the 10-km event (53:15.94) and came fourth overall on an "extremely demanding" course.

Van Belle was ready to "bail" at the half marathon mark because of calf muscle cramping problems, but the remaining woman runner, Monique Beattie (Hout Bay Harriers), didn't know the route and asked him to show her the way. She posted a time of 04:42.03.

The marathon aside, Van Belle narrowly missed winning the festival's flagship event, the Jacob's Challenge Ladder, by the slimmest of margins. His time of 6:11.78 was bettered by a mere three-tenths of a second by "Saint" Clayton Thomas, who recorded a time of 6:11.46 for the 699 steps, claimed to be the longest continuous ladder in the world.

However, the IS lecturer took some consolation from the fact that Clayton's winning time was still significantly lower than the record of 5:42.06, set by Van Belle two years ago in the first Festival of Running.

The St Helena Line and the St Helena Tourist Office sponsored Van Belle's participation in the festival, allowing him to defend his winning title from 2001.