Spinning tales for that Madiba magic 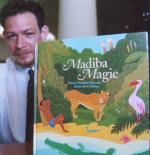 
UCT librarian and author Alex D'Angelo has seen several of his stories make it into book form before, but the recent re-appearance of two of his children's tales have special significance as they now feature in a volume that bears the name of one of the world most recognisable and influential political figures.

Asmodeus and the Bottler of Djinns and Sannie Langtand and the Visitor, which are taken from his three volumes of children's stories, have made it into Madiba Magic: Nelson Mandela's Favourite Stories for Children, released last month by Tafelberg Publishers.

The collection brings together 32 stories from southern and the rest of Africa, with tales from South Africa, Lesotho, Swaziland, Namibia, Botswana, Zimbabwe, Uganda, Zambia, Tanzania, Malawi, Kenya, Nigeria and Morocco, and includes a number of Malay/Indian stories brought to the Cape of Good Hope by artisans and political exiles from the East.

D'Angelo is the only one of the book's writers to contribute two original pieces (some authors penned several retellings of traditional folktales). Sannie Langtand and the Visitor was also selected to conclude the volume.

â€œIt's quite an honour,â€ D'Angelo says of the selection of his works. â€œBeing associated with Madiba also gives the stories a lot more clout.â€

And while he hasn't had the privilege of meeting Mandela as yet, D'Angelo is very excited about the introduction that Madiba penned for the book. â€œHe clearly likes African children's stories and knows a lot about them.â€

According to Tafelberg's Louise Steyn, D'Angelo's pieces were ideal for Madiba Magic.