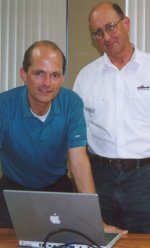 PROFESSOR Rainer Zahn from Barcelona University popped into UCT for a lunchtime seminar on Rapid Climate Change: Palaeoceanographic Impressions and South African Perspectives. He was a guest of UCT's Quaternary Research Centre.

Zahn is one of the chief scientists on board the French research vessel Marion DuFresne, which called at Cape Town harbour last month. The scientists have been involved in a research cruise off the east coast of southern Africa, their interest being the long term behaviour of the Agulhas current and south west Indian Ocean and their effects on world climate change.

Dr John Rogers, a senior lecturer in the Department of Geological Sciences, was also one of the members of the research â€œcrewâ€.

Senate and Council have approved a proposal to change the name of the Recruitment and Enrolment Management Office (REMO).

The new name, Admissions Office, has the advantage of being intuitively recognised by an external client base and therefore more readily understood by high school students as well as potential postgraduate recruits, said director Royston Pillay. The new name is in line with the trend at a number of South African and international tertiary institutions and will take effect from January 1, 2003.

Chair of the UCT Council, Tony Farr, will host a dinner for retiring staff on Thursday, November 14, in the Smuts Dining Hall.

All staff are invited to attend this dinner to support their retiring colleagues. The cost of the three-course dinner, which includes a welcome cocktail, red/white wine, is R75-00 per person.