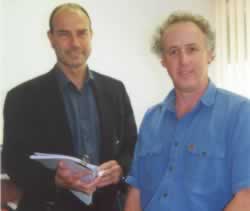 IN A recent issue of Monday Paper we featured news of a second world-first for the School of Actuarial Science (UCT became the first university in the world to receive accreditation for the Professional Communication exam usually written towards the end of the lengthy actuarial qualification process).

Recently Steve Elliott, a representative of the Joint Examination Committee of the Institute of Actuaries (London) and the Faculty of Actuaries (Edinburgh) and former chair of the board of examiners, visited the School in his capacity as external examiner for the above UCT courses.

In his subsequent communication to the Actuarial Society of South Africa, Elliott was full of praise for what UCT was doing, saying â€œ... the Department is maintaining world-class professional standardsâ€.