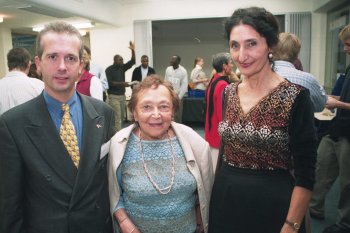 
THE French Section of the Department of Modern & Classical Languages & Literatures (MCL) recently received a generous largesse of more than R4-million from the Cultural Services of the French Embassy in South Africa in the form of prizes and bursaries.

The award included two three-year bursaries for postgraduate students, these going to Anna Ghimenton and Fiona Horne. In addition, cash prizes were made to eight second- and third-year students who have excelled in their French studies.

These were Candace Botha, Candice Dyson, Hugo Grant, Emma Hendrie, Kirsten Morreira, Hugo Myburgh, Joshua Low and Jacqueline Rutter. Courtesy of an Embassy bursary, third-year student Gwendoline Louw will also be enjoying a three-week stay in France shortly, where she will follow a cultural enrichment programme. And finally, the Embassy awarded a seven-month stay to postgraduate student Lucie Jeffery, who will participate in high school activities in France.

All those who received awards to study and visit France will have their travel and living expenses, as well as their fees covered. The Cultural Services of the French Embassy are also paying for all the costs resulting from a collaboration between UCT and the eminent Sorbonne University in Paris, where a number of third-year UCT students are following a programme jointly administered by the two institutions.

"In all, this is a most generous level of support from the French government to UCT," noted Associate Professor Anny Wynchank, Head of the French Section. "So we must be doing something right."

The French Consul, Bruno Clerc, made the formal presentations to the lucky students at the recent MCL class medal-awards ceremony. Also present at the gathering was Emeritus Professor Anne Ubersfeld from the Sorbonne, a renowned French specialist in theatre studies who has been invited to give lectures and a seminar at UCT. Again, the Embassy stepped forward and paid for Ubersfeld's trip to UCT.