UCT's Rossi a star in Europe 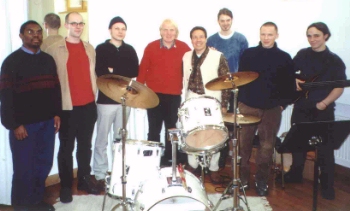 On the road again: UCT's Dr Mike Rossi (4th from right) with students and staff from Stuttgart Conservatory in Germany during a recent trip to Europe.


JAZZ saxophonist Dr Mike Rossi of UCT's South African College of Music, occasionally accompanied by Professor Darius Brubeck of the University of Natal, completed a successful two-week tour of Germany and England over the past vacation.

Rossi began his trip as the guest of Professor Ulrich Suesse and the Stuttgart Conservatory in Germany, where he delivered two lectures, one dealing specifically with South African jazz. While there, he also performed with students from the Conservatory's jazz programme.

Following the Stuttgart stopover, Rossi moved on to England and performed with Brubeck, Alec Dankworth, Peter Turner, Dave Hassell and Peter Fairclough in a series of concerts.

Rossi and Brubeck then began their tour of England with a sold-out performance at the Wigan Jazz Club. Here they also teamed up with the Wigan Youth Jazz Orchestra, which will be visiting South Africa in August.

From Wigan the duo set off for Gainsborough and presented a jazz history lecture and performed at Queen Elizabeth's old high school, Morton Terrace.

The last leg of their trip took Rossi and Brubeck to the University of Nottingham. Their concert included of a number of South African works, standards, as well as some of their own originals.

Guardian jazz critic James Griffiths was so impressed that he gave the concert a four-star review in an early February edition.