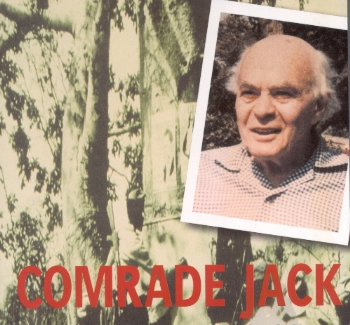 
THE RECENT launch of a new book on the late Dr Jack Simons at the Centre for African Studies (CAS) boasted among its train of guests a number of South Africa's most prominent political figures.

Professor Ben Turok, African National Congress (ANC) Member of Parliament; Ronnie Kasrils, Minister of Water Affairs and Forestry; and ANC Secretary-General, Kgalema Montlanthe, were but a few of the politicos that joined UCT academics and others for the release of Comrade Jack: The political lectures and diary of Jack Simons, Novo Catengue.

Also among the guests was Simons' daughter, Tanya Barben, currently Librarian in Charge of UCT's Rare Books and Special Collections (second daughter, Mary Simons of the UCT Political Studies Department, is currently on sabbatical and could not attend).

Published by STE Publishers, Comrade Jack features notes, lectures and excerpts from Simons' diary during his time at Novo Catengue, the military academy for recruits of Umkhonto weSizwe (MK) in Angola.

Simons, a leading member of the South African Communist Party (SACP), was a lecturer in African Law and Administration at UCT from 1937 to 1964. He was banned from teaching in 1964 and went into exile.