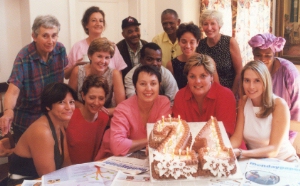 
FELICITATIONS, commemoration, commendation, jubilation and celebration! Your award-winning weekly newspaper, Monday Paper, enters its 21st volume this year. This staff communiquÃ¨ first appeared on January 4, 1982, and while the purists out there will probably argue that we have not turned 21 (remember the Millennium conundrum?), we feel we have sufficient cause to celebrate two and a bit decades of newsmongering. Our pens and cameras have recorded a colourful, and sometimes dramatic, wealth of history at UCT.

Yes, we've endured numerous jibes about being the Tuesday Paper or the Wednesday Paper, depending on the efficiency of departmental mail sorters (hey, we're out on a Monday morning. What happens next is out of our hands). We even tolerated the brief appearance of a rival Friday Paper, published by the underground press, this in 1984 during the notorious years of press restrictions. We've been there.

We've documented the protracted student and staff resistance to the abuses of the apartheid era, starting with front-page news of a "dignified protest" on May 2, 1983, to express the University's opposition to the quota clauses in the Universities Amendment Bill. And when the International Association of Universities declared in 1984 that UCT was the only acceptable South African university, the UCT community read about it in Monday Paper.

The victories and defeats of a legion UCT sports teams have also been documented in Monday Paper and the achievements and contributions of scores of academics and intellectual giants spotlighted. Many of these people are still making news at UCT. (Yes, the torsos were sleeker back in 1982 and some hairlines still lapped the high-water mark, but man, the ties were ugly.)

We've also undergone a physical metamorphosis. In 1985 Monday Paper shrank from its tabloid size to an A4 format, one that was maintained until the current team revamped the newspaper in 2000.

Looking back at the editorial content proved that some things never change. Consider these headlines: "Student digs sought", "Cost of medical aid to rise". That was 20 years ago. The headlines are apt today and will be tomorrow. And, by the way, when last did you last read headlines like this: "The Staff's Year-End Big Splurge" (1982) and "Academics get 21 percent" (1984)? Ah, the heydays.

There have been some eye-catching headlines like "Remodelling Jagger's Rear" (you wouldn't read such suggestive filth in Monday Paper today) and gaffes too horrible to mention (not in our time, mind). We've also recorded some intriguing news snippets, like the report that said a parcel of blood sucking leeches (Slugella vampiri) had gone missing on Campus.

The Zoology Department had apparently imported these delightful creatures from California. There was proof that the parcel had been cleared through Customs, but poof! Gone! The Monday Paper didn't say if they ever turned up in someone's pigeon hole in Bremner or whether they were eventually apprehended while registering for semester abroad studies. Tsk, tsk. Bad reporting.

Photographic styles, thankfully, have changed. Gone are the numerous "firing squad" (launches and cocktail parties) or "grip and grin" (prize or cheque handovers) compositions. Well, mostly. It remains our dream (sigh) to fill our pages with compelling photographs. But academics (whom we mostly photograph) are not known for their willingness to standing on their heads or strike exotic poses in front of the camera. Or not in public anyway.

Bucking tabloid tradition, we've also managed to avoid licentiousness and scandal, which is probably more than you can say for most 21 year-olds. So here's to the next 21 volumes.