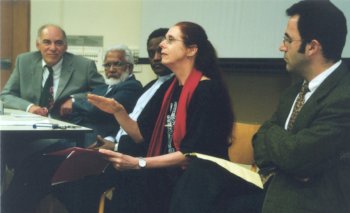 Negotiating the divide: (From left) Professor Robin Cohen, Dean of UCT's Faculty of Humanities; Professor Khalid Masud of Leiden University in the Netherlands; Professor Abdullahi An-Na'im of Emory University; Professor Lidwien Kapteijns of Wellesley College and Professor Ahmad Dallal of Stanford University, were among those those at the recent Islamic Law in Africa conference at UCT.


THE RELATIONSHIP between customary law, common and Islamic law has been the focus of a three-year Islamic Law in Africa project of the Centre for Contemporary Islam (CCI), an undertaking that culminated recently in a conference at UCT.

The CCI initiated the study in 1999, following debates around the possible introduction of a system of Muslim Personal Law in South Africa, explained Dr Shamil Jeppie of the UCT Department of Historical Studies. Jeppie headed the project along with CCI Director, Professor Abdulkader Tayob, and former Director, Professor Ebrahim Moosa, now with Duke University in the United States.

The CCI took the study into the rest Africa to see what the experiences were of similar systems elsewhere on the continent.

The research led to three conferences funded by the Ford Foundation - the first in Dar es Salaam in Tanzania in 2000, the second in Dakar in Senegal last year, and the most recent in Cape Town at the BMW Pavilion on the V&A Waterfront.

Delegates to the event included an array of scholars – historians, anthropologists, jurists – and practitioners from around Africa, as well as from from the United States and Europe.

According to Jeppie, the three colloquiums focused on the "colonial construction" of shariah (Islamic law) in Africa.

Important issues, says Jeppie, as indicated by recent events in northern Nigeria where there have been ongoing "politically motivated" clashes between proponents of the full implementation of Islamic law and existing secular state law.