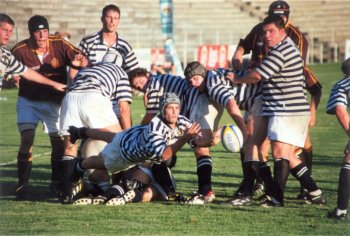 David taking on Goliath: Paul Waldburger and team-mates gave one of their best performances of the season when they drew 8-8 with Maties on May 4.


THE FNB UCT rugby side reduced the Stellenbosch fans to a stunned silence as they nearly beat the reigning champions in a more-than-deserved 8-8 draw at the Danie Craven Stadium on Saturday, May 4.

With the likes of Professors Martin West and John Simpson, Hugh Amoore and alumnus Judge Pat Tebbutt among the vocal UCT retinue, the students had plenty of moral support and everything to play for. Right from the kick-off, UCT's prodigious try-scorer for the year, right-wing John Bradshaw, posed a danger to the Maties defence, staging a number of promising runs to the tryline.

Both sides missed easy penalties early on, but Grant Kolesky put UCT ahead 3-0 in the 25th minute with a well-executed penalty. Stellenbosch immediately went onto the attack, but solid tackling by the UCT side – a feature of the match – kept the home team at bay.

The Maties did pull abreast in the 37th minute however, a penalty taking the score to 3-3, where it remained until half-time.

Stellenbosch started the second-half at a furious pace, throwing just about everything into attack. UCT could easily have lost the game at this stage but for a series of brilliant tackles that denied their opponents from adding to their tally.

Maties eventually took the ball over the UCT line in the 13th minute, a clever chip over the UCT backline setting up the try. With the score at 3-8, one could have been forgiven for thinking that the floodgates would surely open and the favourites would overrun the UCT side.

Not so. UCT took the game to Stellenbosch, Bradshaw getting a sniff of the line a couple of times. He eventually got his reward in the 30th minute when, charging down a Matie clearance, he fell on the loose ball and, to the raucous applause of the UCT contingent in the stands, drew the sides level at 8-8 and gave UCT an opportunity to go ahead. Kolesky – having an off day with the boot – failed to convert, however.

Reticent for much of the final stages of the match, the Matie fans must have thought that the gods were favouring them when the referee awarded their side a penalty – just outside the UCT 22-metre line – late in the match. The Matie flyhalf pushed the easy penalty wide, however, and earned UCT a very deserved share of the match points and a hand on the FNB Intervarsity Trophy.

Following on a good start to the season – bar the self-destructive defeat to Tygerberg – the UCT team finds itself in third position on the Super League log, one place above Maties, and could even be considering a go at the championship this year.

Overall, the UCT visit to Stellenbosch was a good one, the second-side beating their Matie counterparts by 30-24. Also victorious on the day were the two UCT under-21 sides.