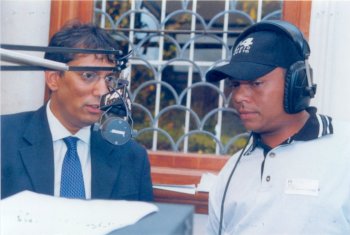 
THE ALUMNI Relations Office took an alternative approach to reaching out to alumni on May 2 when it hosted a unique "reunion on air", courtesy of local jazz station P4 Radio, aka the "heart and soul of Cape Town".

Popular P4 presenter Clarence Ford hosted his usual "laid back" 6-9 (18h00 to 21h00) show from Alumni House. During this time, Ford interviewed a number of black UCT alumni who had been invited to campus to talk about their experiences at UCT, and also entreated alumni who happened to be tuned in to the station to call in for a "live" on-air reunion.

Among those alumni at the function who shared thoughts on their time at UCT as students were Professor Crain Soudien, now Head of the UCT Department of Education; Dimitri Jegels, also a P4 presenter; and Dr Iqbal Surve, CEO of Sekunjalo Investments. Surve, who obtained his MBChB degree from UCT and went on to build a prominent career in medicine and business, spoke openly about the difficulties of being a black medical student at UCT.

He specifically wanted to study at UCT because he knew it to be a good university with high standards, he told Ford in an interview. "But it was a very hard place to be for a black student, especially a black medical student," he said.

"UCT is our institution, meaning it belongs to our country, and we have to take ownership of it. We have to turn this very good institution into an even better institution, one that we in Cape Town and the country can all be proud of."

In a later discussion with other guests at Alumni House, Soudien also talked about his experiences with other former students.

According to Patricia Hendricks, Alumni Relations Officer, the event formed part of an effort to reach out to black alumni, specifically those who studied at UCT in the 1980s and before and who feel alienated from the university. "Integration is a big part of what we do," she said.