Healthcare for all is possible

South Africa faces “enormous challenges”, but attaining widespread access to quality healthcare is not unrealistic – provided solid short-to-medium and long-term plans are enforced effectively. But not before deliberating a set of serious questions and coming up with solutions to them first.

This was the view of Dr Solomon Benatar, Emeritus Professor of Medicine at the University of Cape Town (UCT). Benatar is also an Adjunct Professor at the University of Toronto’s Dalla Lana School of Public Health. He delivered the second annual Dr Stuart John Saunders Lecture titled: “Health, healthcare and professionalism in the 21st century” this week.

Benatar’s work focuses on the structure and funding of healthcare services in South Africa, human rights, bio-ethics and the political economy of global health.

Saunders is a former Vice-Chancellor (VC) and Professor of Medicine at UCT. The lecture seeks to pay tribute to the values he demonstrated during his 15-year tenure and his impactful medical research.

Addressing the audience, which included current VC Professor Mamokgethi Phakeng, Benatar said that for South Africans to achieve quality healthcare, a serious intervention is necessary – and it all starts with bridging the gap between the policy and implementation process.

“[There are] disconnects between policy and implementation. We seem to be capable of making policies that look good on paper, but our ability to implement those policies is weak and less than adequate,” he said.

In the past, Benatar said he had collaborated with a few Canadian colleagues to establish why inequality in the healthcare sector still exists in Canada. Yet Canada spends ten times more per capita on healthcare than South Africa.

“Biomedicine and money alone cannot abolish inequality [in healthcare]. They can reduce [it], but they can’t abolish [it].”

“There were several lessons that emerged from that research – biomedicine and money alone cannot abolish inequality [in healthcare]. They can reduce [it], but they can’t abolish [it],” he said.

Instead, he added, proper planning is required.

And to help get this right, alongside practising doctors, more emphasis should be placed on community workers, nursing practitioners and midwife obstetric units and the significant role they play in the sector.

He said it’s been proven that midwife obstetrics units have made a “major difference” to the maternal mortality rate in the Western Cape in particular.

Long-term plans are a bit more complex. He advised that these be geared towards economic and political power structures and their influence and effects on the complete healthcare system.

Universal access to healthcare is a global debate, and the World Health Organisation’s (WHO) primary goal. But, Benatar said what organisations like WHO are not really talking about or taking into consideration is the required level of access to this vital service.

“If we’re going to have universal access to health, [we] need to define what’s possible and [realistically] what can be done.”

“At that level, you have to ask yourself what kind of healthcare they will have access to. If [we’re] going to have universal access to health, [we] need to define what’s possible and [realistically] what can be done,” he said.

Benatar urged the public sector to ask the sometimes-difficult questions on implementation plans and suggest strict timeframes to remain accountable.

More than that, he encouraged the public and private sectors, in South Africa specifically, to work together cooperatively to achieve this long-term goal.

“There must be a means of generating goodwill among common professionals for the good of the patient. There must be principles involved in order to do that,” he said.

The University of Cape Town (UCT) hosted an online memorial service for former Vice-Chancellor Dr Stuart Saunders on 24 February. Dr Saunders was a dedicated servant, steward and supporter of UCT. He passed away on Friday morning, 12 February 2021.

Stuart John Saunders was born in Cape Town, South Africa, on 28th August 1931. After graduating MBChB with honours in 1953 at the University of Cape Town, he did post-graduate research at the Royal Postgraduate Medical School at Hammersmith in London and at Harvard University. He received the degree of Doctor of Medicine in 1965 (University of Cape Town). He began his administrative career as the University of Cape Town’s Head of the Department of Medicine (1971-1980) and was co-founder of the university’s Liver Clinic & Liver Research Unit (a field in which he wrote some two hundred articles and co-authored a study that has become a classical reference). He was Vice-Chancellor from January 1981 to August 1996.

You are welcome to send your tributes, or share your memories – and these will be shared on this page. 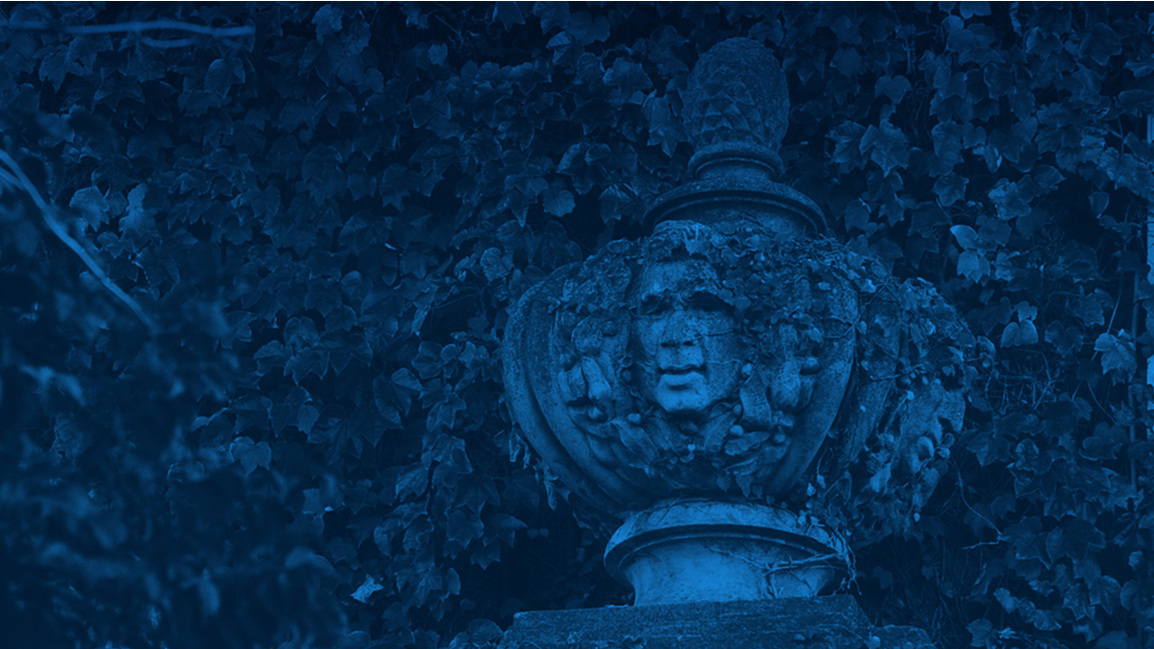 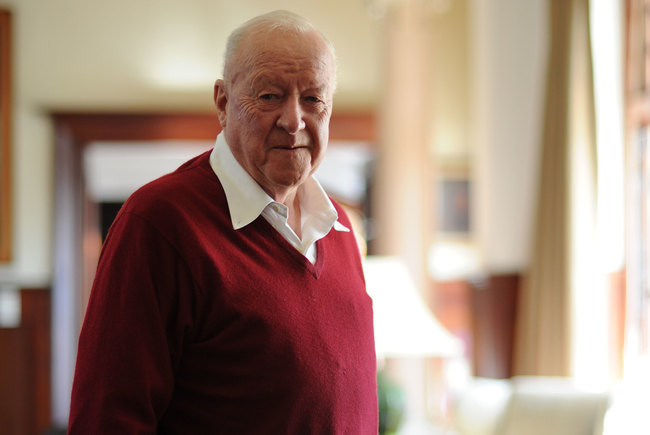 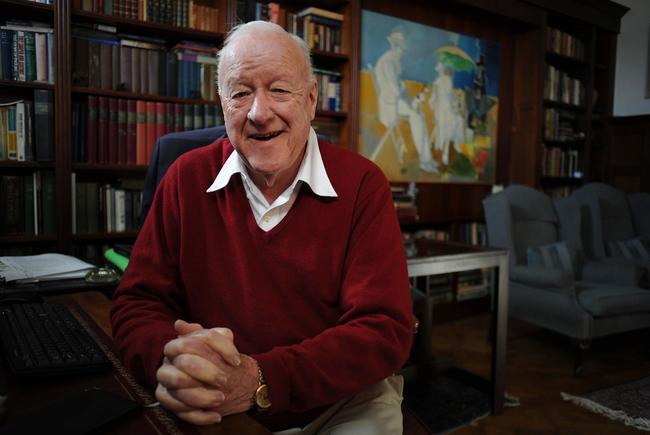 Specialist physician and former UCT vice-chancellor Dr Stuart Saunders has passed away. Saunders will be remembered for his servanthood, stewardship and support of the university over decades. 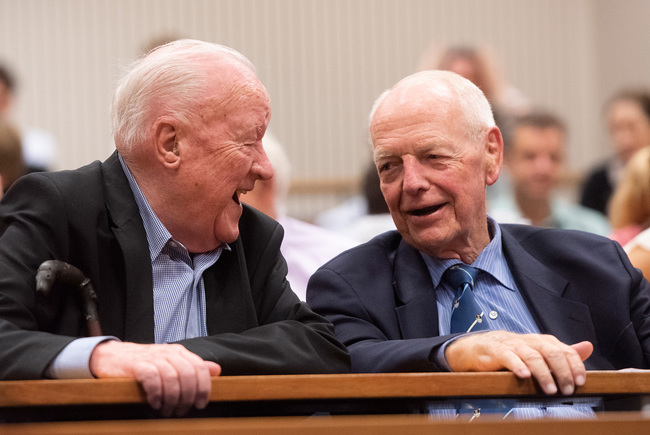 Dr Stuart John Saunders, former VC of the University of Cape Town (UCT) and former head of the Department of Medicine in the Faculty of Health Sciences, passed away on 12 February 2021. 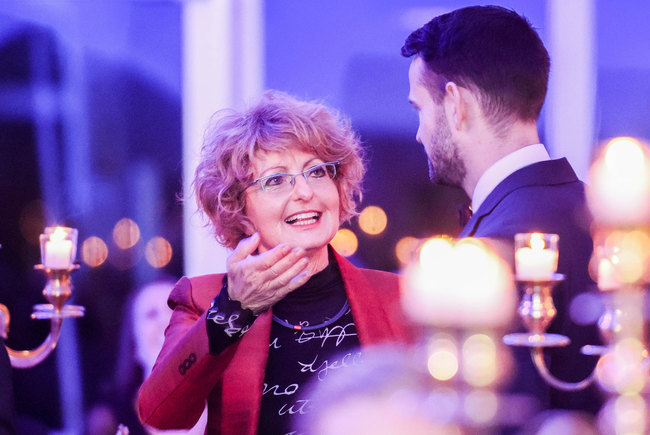 Professor Deborah Posel, research professor at the University of the Free State and UCT emeritus professor, reflects on Stuart Saunders’ significant impact on the humanities. 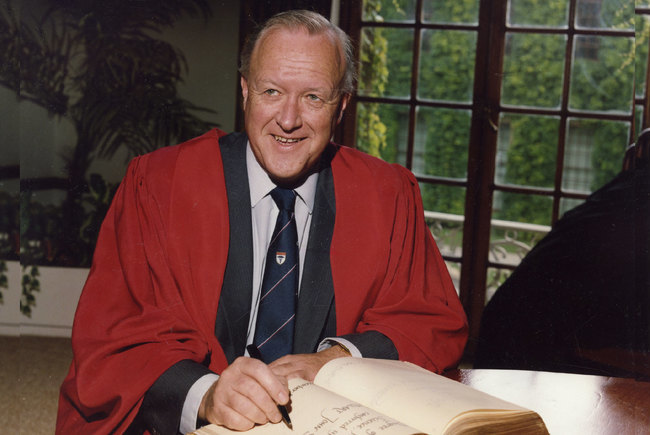 Erica Gillard, an academic planning officer at UCT from 1990 to 1999, pays tribute to Dr Stuart Saunders, the former vice-chancellor of the university. 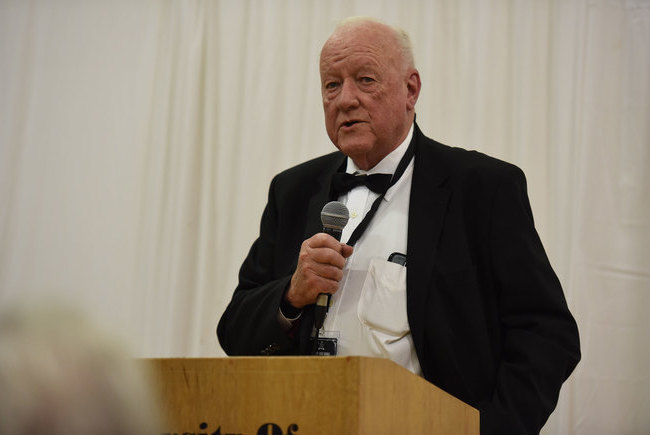 Sibylla Tindale was the director of the UCT Trust (UK) from 1990 to 2010 and remembers Dr Stuart Saunders on behalf of the Trust. 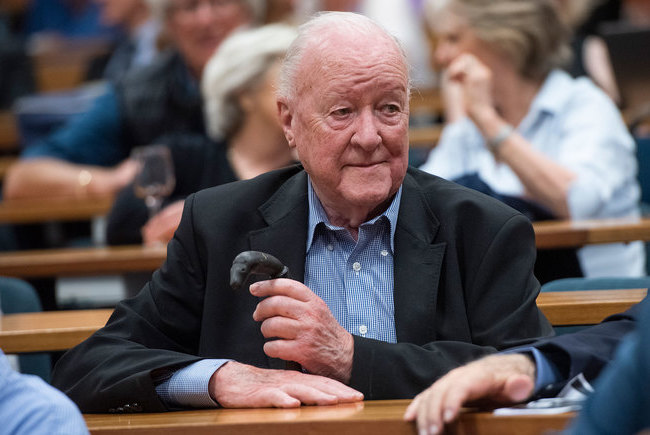 Professor Tom Moultrie, a member of the Students’ Representative Council in 1989/90, remembers Dr Stuart Saunders, who passed away on 12 February 2021. 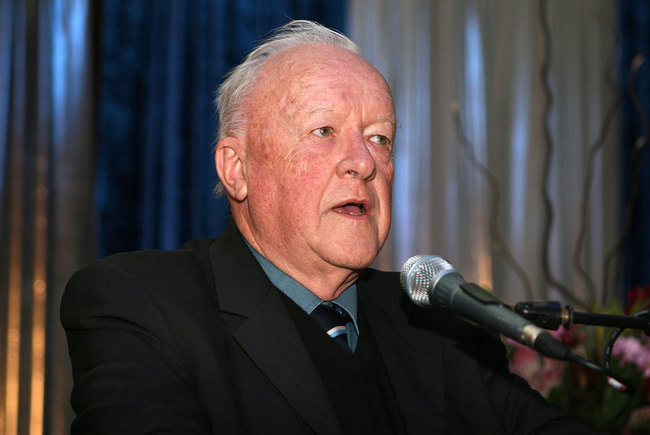 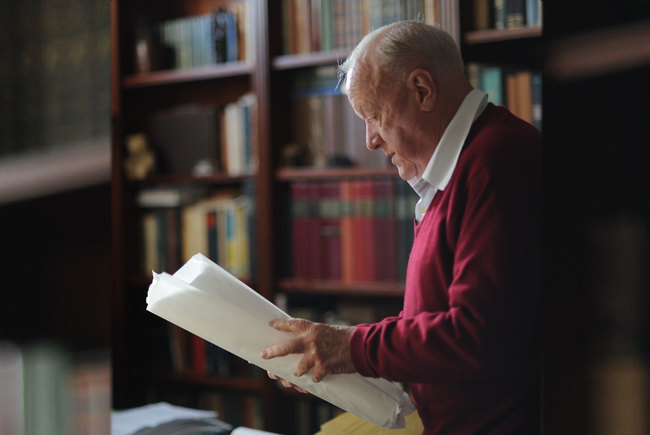 Siamon Gordon, a UCT alumnus and a Glaxo Wellcome emeritus professor of cellular pathology at the University of Oxford, reflects on his time and experiences with Dr Stuart Saunders. 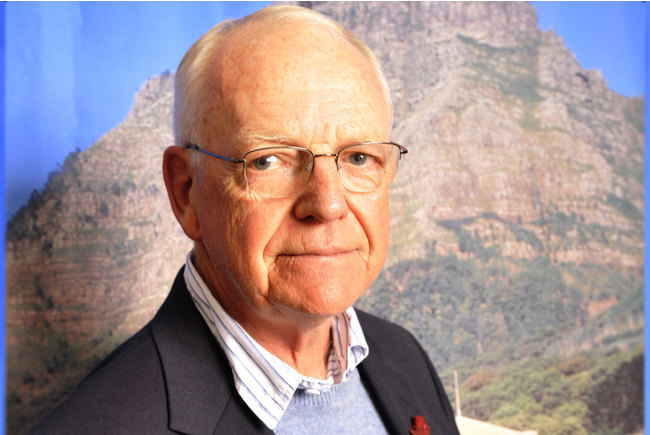 Emeritus Professor John Terblanche, a UCT staff member from 1967 to 2000 and a member of UCT Council, remembers Dr Stuart Saunders. 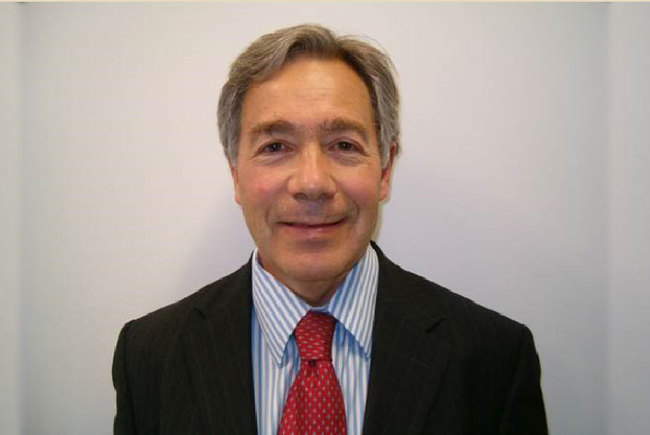 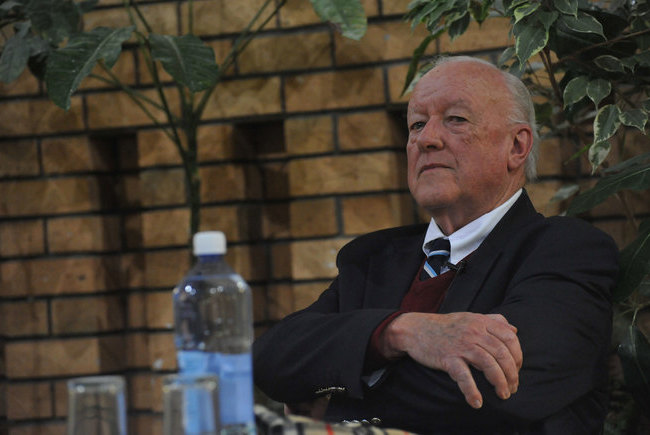 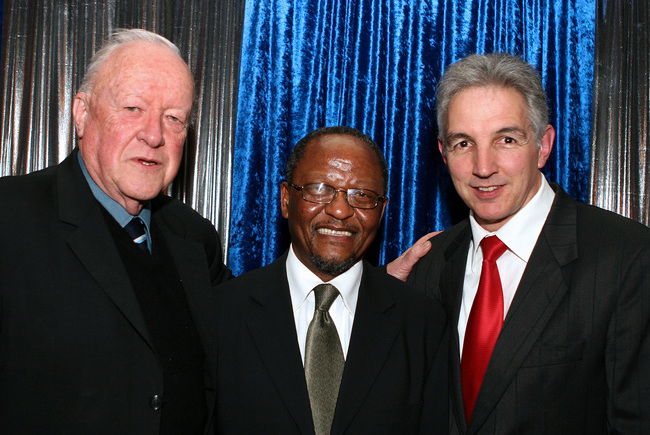 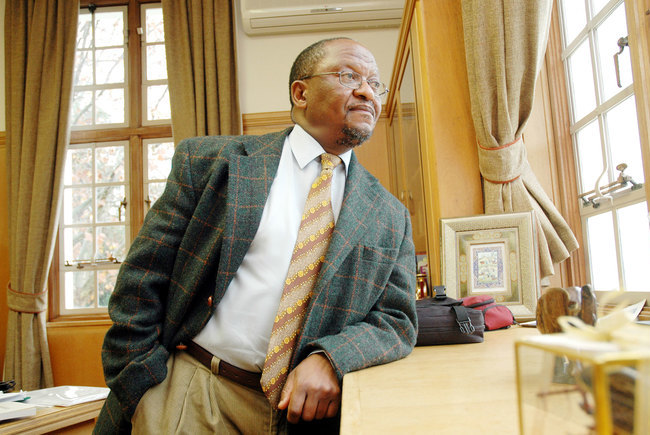 From one former UCT vice-chancellor to another: Professor Njabulo S Ndebele fondly reflects on his time with Dr Stuart Saunders. 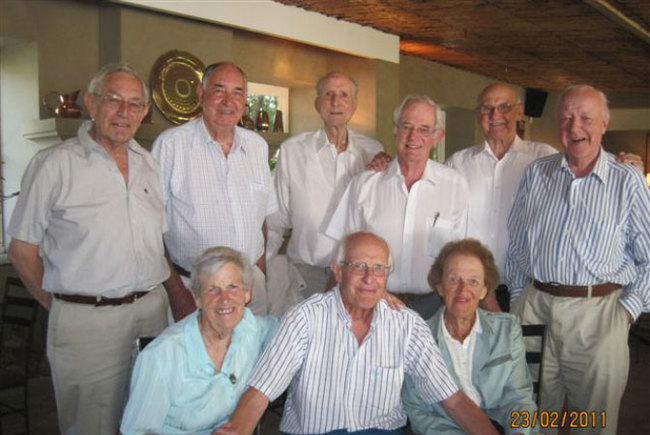 UCT alumna Margaret Elsworth shares her memories of Dr Stuart Saunders, who passed away after a short illness on 12 February. 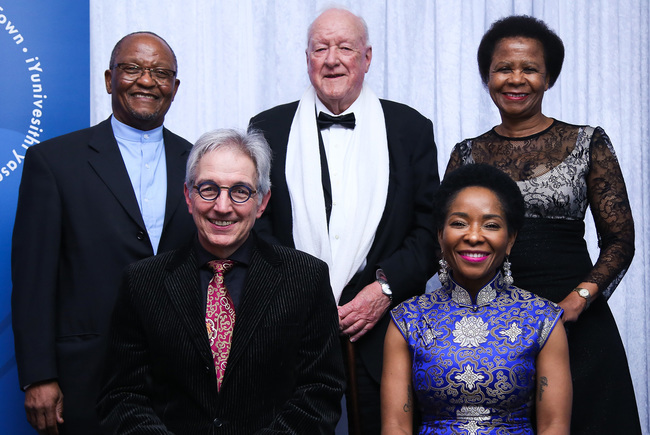 A courageous leader who opened doors for many Under the Baobab: Essays to Honour Stuart Saunders on his Eightieth Birthday

The African Yearbook of Rhetoric, Vol. 2 No. 2, 2011 imprinted a Special Series in honour of Dr Stuart Saunders. Past members of UCT’s Students’ Representative Council and the National Union of South African Students reflect on Dr Stuart Saunders’ “unwavering commitment” to their right to protest. Emeritus Professor Wieland Gevers described the late former vice-chancellor Dr Stuart Saunders as an innovative thinker who always found creative ways to do what was “forbidden”. Emeritus Professor Anwar Mall reflects on Dr Stuart Saunders, both as a medical colleague and fierce defender of equal access to students. Hugh Corder, Emeritus Professor of Public Law, shares his memories of Dr Stuart Saunders and the immense legacy he left behind. Anita Saunders: 1945–2017 Anita Saunders (née Louw) was born in De Aar on 27 May 1945 and came to UCT in the mid-60s to study art and cultural history. In 1978, Anita joined the staff of the Department of Cultural History at UCT where she worked as an academic until 1984 when she married Stuart Saunders (then UCT Vice-Chancellor). 22 Apr 2017

A government spy at UCT? Stuart Saunders remembers interrogating a government spy in his office, in his book Vice-Chancellor on a Tightrope: A personal account of climactic years in South Africa (2000). 20 Apr 2015

Wits honours former UCT vice-chancellor Dr Stuart Saunders urged health science graduands from Wits to never forget that sick people look to them for more than just the healing of their disease. 19 Dec 2014

Saunders passes on the baton Former vice-chancellor Dr Stuart Saunders remains one of the university’s most committed and called-upon supporters. 15 Dec 2010 Tribute: service to UCT and to higher education