In recognition of her service and outstanding contribution to the public healthcare sector in South Africa and abroad, the University of Cape Town (UCT) presented public health expert Professor Laetitia Rispel with an honorary doctorate this week.

UCT awards honorary doctorates to distinguished individuals in recognition of top-rated work in their respective fields who have also made a significant contribution to the country, the continent and the globe. Professor Rispel is an accomplished academic and public health specialist and is revered both locally and abroad for her work in the sector. Currently, she serves as a professor in the School of Public Health at the University of the Witwatersrand (Wits) and also holds the South African Research Chairs Initiative (SarChI) Chair titled: “Research on the Health Workforce for Equity and Quality” in the same school.

Rispel accepted her degree of Doctor of Science honoris causa from UCT Chancellor Dr Precious Moloi-Motsepe during the Faculty of Health Sciences (FHS) graduation ceremony on Thursday, 15 December. The afternoon event drew the curtain on a bumper two-day packed summer graduation line-up, held outside the Sarah Baartman Hall on upper campus. Dr Moloi-Motsepe conferred a total of 1 496 degrees during four ceremonies on Wednesday and Thursday.

Rispel graduated with her BSc in nursing from UCT in 1982 and a BSc honours in epidemiology and biostatics with distinction from Stellenbosch University in 1987. In 1991 she graduated with her MSc in medicine from Wits followed by her PhD in Medicine in 1998.  During her illustrious career, Rispel has received multiple local and international awards including the Shoprite Woman of the Year Award in 2003 (health category); and the International Nurse Researcher Hall of Fame award in 2013. She was named the inaugural member of the International Academy of Quality and Safety in Health Care in 2018 and in 2020 she received the prestigious Senior Africa Oxford Fellowship.

To date, Rispel has published extensively on various aspects of health policy and systems research and her work has influenced and informed restructure and transformation within the national healthcare system. In the past eight years alone, she published five books and 52 journal articles and supervised and mentored seven PhD students and 10 master’s students respectively. In 2020 she also completed a two-year term as president of the World Federation of Public Health Associations – making her the first African woman and only the third woman globally to occupy this position in the federation’s more than 50-year history.

She’s been described by colleagues as a trailblazer, who has worked tirelessly throughout her career to develop young African scholars, and black women in particular. Rispel is considered a thought leader and a champion for social justice and she has made it her mission to ensure that the ethos of South Africa’s, Africa’s and the world’s health systems place people at the centre of the cause. 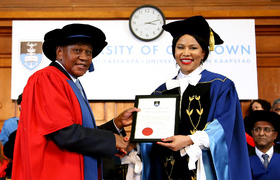 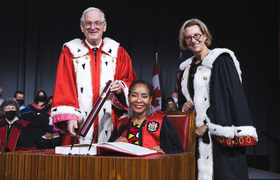 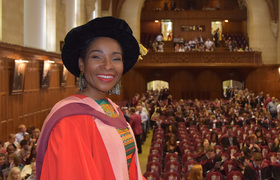