Dr Jack V Fletcher, the co-founder, director and chief technology officer of Hydrogen Energy Applications (HYENA), a University of Cape Town (UCT) spinoff company, is among 16 talented innovators who have been shortlisted for the 2022 Africa Prize for Engineering Innovation (APEI). The company is fundraising for a second round of funding, which will include investment by UCT’s Evergreen Fund.

Dr Fletcher has been shortlisted for his work on the HYENA POWER POD, a fuel-cell based hydrogen generator that converts liquefied petroleum gas (LPG) into usable electricity, all within one device. He is the 11th South African to be shortlisted for the award since its inception in 2014. “Being selected for the shortlist of the prestigious Africa Prize for Engineering Innovation is a real honour. The prize will give HYENA access to business training, sector-specific mentorship and the academy’s wide-ranging network of engineers and business experts,” said Fletcher.

Throughout Africa there is a burgeoning demand for electricity in off-grid/poor-grid locations. Currently, this need is most often being met through diesel generators, which come with a long list of impediments, including poor reliability, demanding maintenance cycles, noise pollution and particulate emissions.

With the POWER POD innovation, HYENA aims to revolutionise the provision of electricity in poor-grid locations throughout Africa by employing fuel cell technology that converts hydrogen into affordable, on-demand and weather independent electrical power from locally available fuel.

Although hydrogen distribution infrastructure is practically non-existent in Africa, Fletcher and team identified LPG as an appropriate hydrogen carrier for on-site generation, as it is already widely used for cooking and heating throughout the continent.

In the former, hydrogen is released from water and LPG via a series of reactions over platinum group metal catalysts. In the fuel cell, hydrogen and air are converted to electrical power and water. The entire operation is silent while generating electrical power with 15 % lower CO2  emission than a diesel generator.

“We want to make fuel cells possible and practical in Africa, where these new hydrogen technologies often face obstacles not considered in developed regions,” said Fletcher. “The use of existing LPG infrastructure makes the POWER POD a real solution that we believe can be truly transformative.”

Benefits of the POWER POD

Given the challenges it aims to solve, the POWER POD is specifically designed to be simple to manufacture and easy to service. It uses exchangeable cartridges, much like the average printer, which can be swapped out when necessary.

Furthermore, it generates no vibration or unhealthy particulates, and does not require frequent maintenance as there are no moving parts.

The technology has many applications but is particularly well suited to powering remote mobile phone towers. Fletcher and his team have demonstrated the technology and developed several prototypes at a small scale. They are currently working on a pre-commercial, 5 kW POWER POD.

Prior to being shortlisted for the 2022 APEI, the HYENA POWER POD’s potential was recognised when the company became the very first recipient of seed phase funding from the then newly established University Technology Fund in 2020.

Throughout their journey to commercialisation of the POWER POD, HYENA has worked closely with the Research Contracts & Innovation (RC&I) office at UCT. RC&I offers innovators and university spinout companies comprehensive support services, ranging from intellectual property registration and assistance with fundraising to identifying commercialisation opportunities and negotiating contracts with possible partners and/or funders.

“The team at RC&I has however been extremely supportive throughout this time with their continued commitment to HYENA’s success.”

“Going from my background in research and development to founding a start-up has been a rollercoaster ride,” said Fletcher. “The team at RC&I has however been extremely supportive throughout this time with their continued commitment to HYENA’s success.”

With the support of RC&I, HYENA is set to receive a next round of investment from the UCT Evergreen Fund, which was set up with the specific purpose of enabling the commercialisation and application of UCT research outputs.

RC&I’s Senior Manager: Innovation, Dr Andrew Bailey, said: “The IP Advisory Committee’s approval of the Evergreen Fund investment is subject to HYENA raising matching funding to support building and testing of the minimum viable product [MVP] in the field. This has been quite a tricky technology to develop due to the inherently high cost of the MVP, which includes a fuel cell, which means one [needs] unusually large amounts of funding very early on before the technology can be demonstrated at commercial scale. Unit costs will decrease significantly when the POWER POD is in commercial production.”

One of the goals of APEI is to offer all shortlisted individuals the opportunity to accelerate their businesses through a unique support package, which runs from November 2021 to June 2022.

The benefits of selection include comprehensive and tailored business training, bespoke mentoring, and media and communications training. 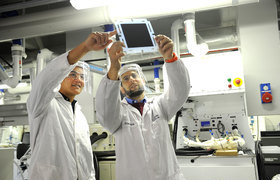