A team of researchers from the Catalysis Institute at the University of Cape Town (UCT) and integrated energy and chemical company Sasol have made advancements in the use of commercial iron catalyst, produced cheaply and at large‑scale at Sasol’s Secunda plant, which will enable conversion of unavoidable or biogenically derived carbon dioxide (CO2) and green hydrogen directly to a variety of green chemicals and jet fuel.

This development is a significant step towards the implementation of CO2 hydrogenation technology in South Africa.

For decades Sasol has been using its Fischer Tropsch (FT) technology to convert low‑grade coal and gas into synthetic fuels and chemicals. The largest scale example of the commercial application of this technology is its Secunda plant in Mpumalanga, which converts synthesis gas – a mixture of carbon monoxide (CO) and hydrogen (H2) – derived from coal gasification and supplemented by reformed natural gas into 160 000 barrels of products per day.

Professor Michael Claeys, the director at UCT’s Catalysis Institute, said: “Sasol and UCT have a longstanding collaboration on the fundamental aspects of FT technology, on both commercial cobalt and iron catalysts, which provides workable solutions for operating plants. The partnership brings together Sasol’s established expertise around FT catalysis and synthesis gas conversion, and UCT’s modelling and in‑situ characterisation capabilities.”

In recent years, the university has also been working on CO2 conversion technology and has built up extensive experience in CO2 hydrogenation.

With its announced intention to leverage its existing FT technology and skillset to lead the development of South Africa’s hydrogen economy, Sasol and UCT have been working on finding innovative ways to use this chemistry to convert CO2 and hydrogen into a range of useful and green products. Now they have.

“Conversion of green hydrogen together with CO2, a process called CO2 hydrogenation, is gaining significant interest worldwide and is a promising way to produce sustainable aviation fuels and chemicals which have a significantly lower carbon footprint,” said Dr Cathy Dwyer, the vice president of science research at Sasol Research & Technology.

There are two ways to convert CO2 into a useful range of products using FT chemistry. In the indirect pathway, CO2 and green hydrogen are first converted to synthesis gas either by co‑electrolysis or over a catalyst.

The synthesis gas is then reacted over a suitable FT catalyst, to produce hydrocarbons and water. Sasol’s suite of cobalt catalysts is highly efficient for the latter process. Alternatively, hydrogen and CO2 can be converted directly over a single catalyst to a useful range of products, using what is termed “tandem” catalysis, and this is where the iron catalysts have been found to be advantageous.

The collaboration with UCT has revealed that Sasol’s iron catalyst can achieve CO2 conversions greater than 40%, producing ethylene and light olefins, which can be used as chemical feedstocks, and significant quantities of kerosene‑range hydrocarbons (jet fuel). 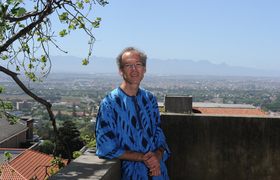