South African poet and writer Ismail Joubert (1902–2002) went by many legal names. There was his birth name, Mogamed Fu’ad Nasif, given by his Egyptian father and Turkish mother; his adoptive “Methodist” name, John Charlton; foster name Jozua Joubert (before he converted to Islam and took the name Ismail) and the one uMkhonto we Sizwe gave him: Tatamkhulu Afrika. It was the name he loved most.

Afrika’s work won many accolades: the gold Molteno Award for lifetime services to South African literature; the Thomas Pringle Award, and CNA Debut Prize, both 1991, for Nine Lives; the Olive Schreiner Prize for Poetry, 1992, for Dark Rider; Sanlam Literary Award, 1996, for Turning Points, and Mad Old Man under the Morning Star, 2000. In 1996 his works were translated into French.

And yet his contributions to South African literature have been largely neglected, if not forgotten, said Dr Halim Gençoğlu, a University of Cape Town (UCT) Ottoman scholar and research fellow in the Department of Sociology’s Re-Centring Afro Asia Project.

This must change, Dr Gençoğlu noted during his presentation at a recent cultural event at the Turkish Consulate in Cape Town. Here he urged South Africans to resuscitate and revive Tatamkhulu Afrika’s work.

“[Afrika] was a very interesting man, from many dimensions,” said Gençoĝlu. Afrika is recorded as having worked as bartender, drummer in a band, shop assistant, and a labourer in the copper mines.

“You look at his life, it was very chaotic, [he was] like a chameleon: changing a lot.”

It was while working on an exhibition at the Bo Kaap Museum that Gençoĝlu found Afrika’s books on display. The links between Afrika’s family lineage and the Ottoman Empire piqued his curiosity, as did the author’s life journey, chronicled by his various names.

“You look at his life, it was very chaotic, [he was] like a chameleon: changing a lot.”

But there was also tragedy. Afrika was born Mogamed Fu’ad Nasif in Salem, Egypt, to an Egyptian-Arab father and Turkish mother. Gençoğlu’s research reveals that the couple had corresponded with Ottoman Empire authorities in 1901 to facilitate a move to Istanbul with their young son. They were rejected for reasons not yet apparent, but which Gençoĝlu is now pursuing via letters Afrika’s father wrote to the Ottoman authorities.

Instead, the family emigrated to South Africa in 1923. But the couple soon died in the Spanish flu pandemic, leaving Afrika orphaned.

“Mogamad was fostered by family friends. He was brought up by a white Christian family and given a ‘Methodist’ name, John, and the surname Charlton.”

It was only later that Afrika learnt he’d been adopted.

“I think, that’s why he wrote ... the emotion can be seen from his first novel, Broken Earth.”

Gençoĝlu noted, “So that was, I think, the first ‘refreshing’ of his life.”

As John Charlton, Afrika enlisted and fought in North Africa during the Second World War. Captured at Tobruk, his experiences as a prisoner of war featured prominently in his writing, especially Bitter Eden (2002).

“I think, that’s why he wrote ... the emotion can be seen from his first novel, Broken Earth, published in 1936 but only released in 1940 after the publishing house was bombed by the Nazis and most of the copies were destroyed.”

It took over 50 years before Afrika’s next publication, Nine Lives, a collection of verse, was released.

After the war, he left his foster family and went to Namibia (then South West Africa). There he was fostered by an Afrikaans family and given his third legal name: Jozua Joubert.

Then came a sea change for Afrika. In 1964 he converted to Islam and changed his name to Ismail Joubert. He’d also moved to live in District Six, a mixed-race, inner-city community.

“In fact, he says that also in one of his poems, that his religion was calling him back … He found himself close to Islam when he visited District Six. And District Six became something very special to him throughout his life, reflected in his touching poem, ‘Nothing’s Changed’.”

“With an Arab father and a Turkish mother, Afrika could have been classified as a ‘white’ but refused as a matter of principle.”

But it was the Group Areas Act that was to destroy District Six that “really put the fuel in his engine and fire in his belly, said Gençoĝlu. Afrika, the activist, was born.

“With an Arab father and a Turkish mother, Afrika could have been classified as a ‘white’ but refused as a matter of principle. He also preferred living in the Muslim community in District Six; this is what makes it interesting – how he actually changed his identity.”

Afrika founded the militant Muslim organisation Al-Jihaad to resist the destruction of his beloved District Six, and apartheid. When the organisation became affiliated with the African National Congress’s armed wing, uMkhonto we Sizwe, they gave him the praise name of Tatamkhulu Afrika loosely translated as grandfather of Africa.

It was the name he took to the grave.

In 1987 Afrika was arrested for terrorism and banned from speaking or writing in public for five years. But he didn’t stop, using the name Tatamkhulu Afrika instead. He was also imprisoned with Nelson Mandela and released in 1992.

Afrika died in 2002 after injuries sustained when he was hit by a car, just after the publication of his final novel, Bitter Eden. He left several unpublished works, including his autobiography, two novels, four short novels, two plays and poetry.

Gençoğlu found Afrika’s grave in Johnson Road cemetery in Rylands. But he was shocked by its neglected state.

“His grave was so small and had almost disappeared. So, I wanted to acknowledge this man, this very big man, not because he was of Turkish origin, but because I respect his struggles and activism against apartheid South Africa. He did so much for oppressed people. He was an amazing character and a fascinating personality.”

Gençoğlu has penned a motivation to UCT’s Naming of Buildings Committee to name a building or facility after Tatamkhulu Afrika so that he and his work and activism are not forgotten.

“We must recognise these contributions to our society and to Muslim society. That’s what they deserve.” 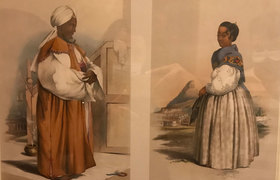 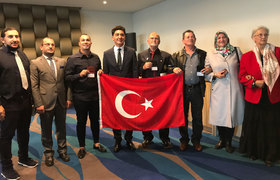