Based on the performers’ research with the Re-Centring AfroAsia Project, a live, improvised visual and musical production, entitled Ife & Bilal: Songs on a Journey, was recently performed in Johannesburg and Cape Town.

The production, which was commissioned by the Re-Centring AfroAsia Project, combined the work of musicians, visual artists and theatre practitioners from South Africa, India and Turkey, among them postgraduate students from the University of Cape Town (UCT) and the University of the Western Cape (UWC).

The project is a five-year, multi-pronged research, mapping and archiving venture, established in 2016 as a partnership between UCT, Ambedkar University in Delhi, the University of KwaZulu-Natal, UWC and University of the Witwatersrand. It is supported by the Andrew W Mellon Foundation.

Participating UCT researcher and musician Bronwen Clacherty, who co-directed and performed in Ife & Bilal, said the project aims to highlight the connections, migrations and musical influences among people across and around the edges of the Indian Ocean during the pre-colonial period 700 to 1 500 AD.

“The aim is to re-centre Africa and Asia by finding out about the movements of people in this area, and to examine the material, art and social culture they practised, shared and took to other places,” she said.

“The research focuses on two continents, which are usually viewed through the lens of the coloniser. It also affirms that Asia and Africa were always an important part of world history, constituting a large part of the culture that exists today.”

“The aim is to re-centre Africa and Asia by finding out about the movements of people in this area, and to examine the material, art and social culture they practised, shared and took to other places.”

Clacherty’s specific research centres on the East African coast and focuses on women’s songs and stories. Musical linkages, she said, was selected as one of the focus areas of the project – the others are migration, slave trade, trade routes and urban centres – because “music provides a great deal of information and evidence of interaction between people that other things cannot”.

Fellow UCT student, researcher on the project and Ife & Bilal co-director and performer Mark Aranha elaborated: “Oral sources are too often discounted and there are insights to be gained from the study of old songs and archival recordings. Folk songs contain the voice and memory of ordinary people who are usually left out of the narrative of written history.

“There is plenty of material beyond the lyrical as well, such as who sung the song, how and when it was performed, melodic and emotional information, and much more.”

Aranha’s research focuses on the history and music of two communities in the southwestern coastal state of Kerala on the Malabar Coast of India, which were established as a result of pre-colonial mercantile interactions across the Indian Ocean.

Another member of the Ife & Bilal cast, UCT historian Halim Gencoglu, is interested in the early influence of Turkey in Africa. Turkish presence in Africa, he said, began with the migration of people from the Tulunid dynasty (the Tulunids were the first independent dynasty to rule Islamic Egypt and much of Syria) from around 868 to 905 AD.

According to Gencoglu, who wrote the book Ottoman Traces in Southern Africa: The Impact of Turkish Emissaries and Muslim Theologians, Kiswahili and isiXhosa are among the African languages that make use of some words that sound similar to Turkish words.

A delicate, sensuous and decisive production

Creative outputs are a central component of the Re-Centring AfroAsia Project, which is designed to incorporate embodied forms of knowledge alongside scholarship.

Using several different languages and sounds from relevant geographical spaces, the objective of the Ife & Bilal production was to present audiences with a re-imagined version of the connected shores of the Indian Ocean around a thousand years ago when traders, sailors, migrants and exposers of religion shared ideas, sounds, culture and products.

Narrated by an all-seeing parrot from India, it told the story of Ife of Ethiopia and her love interest, Bilal from Zanzibar, and Seljuk, a Turkish merchant trader, who – attracted to Ife – threatens to separate the lovers forever.

The creative approach, said Aranha and Clacherty, was to follow “a journey through places, events and characters with their own histories and thoughts, mapped out in a descriptive score and navigated using contemporary musical and visual instruments”.

And, importantly, while they wanted to produce a performance that was entertaining and evocative, it was crucial to the researchers that they remain true to what their studies have revealed.

A year in the making, Ife & Bilal challenged its makers to interact with their research and their creativity to communicate the primary objective of the Re-Centring AfroAsia Project. That is, to provide a new thinking (versus the traditional, colonial-based approach) about the history of Asia and Africa and the interaction between people from the continents, and to explore new ways of looking at stories, art and music.

“The compositions are rooted in the musical landscape of the Indian Ocean and their execution is richly textured and to the point.”

Although it follows a script, the storyline is not necessarily always explicit to audiences, which is deliberate, said Aranha and Clacherty, and is part of what makes the production provocative and effective. If the aim is to encourage people to think differently, it makes sense to lure them from thoughts that are comfortable and take them on an unfamiliar journey.

Chairman of the Re-Centring AfroAsia Project Professor Ari Sitas, of the UCT Department of Sociology, described the performance as follows: “The ensemble has produced a delicate, sensuous and decisive musical and visual experience. The compositions are rooted in the musical landscape of the Indian Ocean and their execution is richly textured and to the point. Through them, the love between Ife and Bilal wafts skywards despite the hardships of slavery and violence.”

The visual content of the production was provided by Kristy Stone of UWC and Conor Ralphs, who say they “drew inspiration from 10th century Arabic, African and other contemporaneous enquiries into astronomy, astrology, optics, geometry and alchemy … [and] through a process of co-creation, the visuals explored the material aspects of water, sound, metal and light”.

Other members of the cast were UCT’s Cara Stacey and Qondiswa James. Karen Press worked on the script with Clacherty and James. 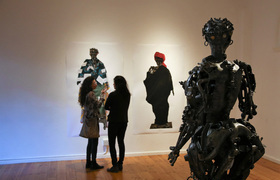 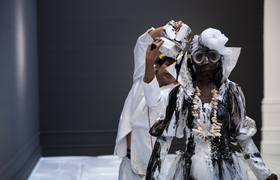