Over recent years since 2011 and apparently at random, super-groups of humpback whales (Megaptera novaeangliae) ranging from 20 to 200 have been observed in the coastal region of the Southern Benguela current between St Helena Bay and Cape Point on the west coast of South Africa. The sightings have been reported since then by several members of the public during the months of October, November and through to December.

This occurrence is unique as while humpback whales in the Southern Hemisphere are well known for their annual migrations between the summer high-latitude Southern Ocean feeding grounds and the winter mating and calving grounds in low-latitude, tropical and subtropical coastal waters, the feeding strategy of such densely packed feeding individuals is unprecedented in this region (at such low latitudes ranging from 32.5°S to 34.5°S). Globally it has also been unprecedented until recently when super-groups have been reported in Australia too.

A new study co-led by Dr Subhra Prakash Dey and Associate Professor Marcello Vichi from the University of Cape Town (UCT) Department of Oceanography and the Marine and Antarctic Research Centre for Innovation and Sustainability (MARIS), aimed to understand this phenomenon. In collaboration with an international team of marine mammal experts, marine biogeochemists, and numerical modellers, they combined satellite observations and a physical ocean model to understand environmental drivers of this occurrence in the Southern Benguela Upwelling System (SBUS) off South Africa.

“The formation of super-groups in recent years suggests that there might be a change in oceanographic or ecological characteristics.”

Dey shared: “The formation of super-groups in recent years suggests that there might be a change in oceanographic or ecological characteristics which provide the conditions for this novel feeding strategy in the SBUS.”

However, this condition alone is not sufficient: changes in the typical northward and eastward transport of waters in the Cape Peninsula along-shore jet current are also

required. This change is a reduction in the flow of water during the month of October, which leads to higher retention of the phytoplankton bloom.

“This study provides evidence of causal events that would allow researchers and the whale watching industry to prepare for super-group occurrences at least one month in advance.”

Both the retention and high chlorophyll concentration, which is used to measure phytoplankton abundance, are found to be significantly higher in October in 2011, 2014 and 2015 compared with other years. According to the team, the combination of a phytoplankton bloom and a reduction in water volume export from the area in October leads to an increase in secondary production and high concentrations of the humpback whales’ prey.

“Though the detailed atmospheric and oceanographic settings explaining the origin of these anomalies remain unknown, this study provides evidence of causal events that would allow researchers and the whale watching industry to prepare for super-group occurrences at least one month in advance, through the evaluation of chlorophyll and retention indices derived from satellite data and ocean models,” explained Vichi.

“Given the upcoming season of possible super-group occurrences, we call for citizen science reports to help us better frame their distribution along the coast.”

The research is part of the Whales & Climate programme, an interdisciplinary approach to understand the impacts of climate change on the recovering population of humpback whales. 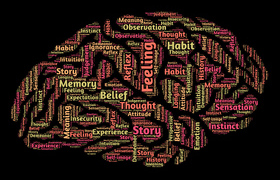