25 March 2021 | Story Nobhongo Gxolo. Read time 4 min.
On the 24th of March the Africa Health Research Institute (AHRI), an independent, transdisciplinary scientific research institute based in KwaZulu-Natal and the Institute of Infectious Disease and Molecular Medicine (IDM), an international centre of excellence where world-class scientists collaborate to tackle diseases of major importance in Africa, hosted a joint, virtual World Tuberculosis (TB) Day mini-symposium in recognition of the day. The IDM is based at the University of Cape Town’s Faculty of Health Sciences.


TB remains a leading cause of death in South Africa. Despite it being a curable disease, an estimated 58 000 people died from TB in 2019 in the country.

“The IDM and AHRI are at the forefront of cutting-edge research to solve the challenge of one of South Africa’s most critical health challenges,” said AHRI director, Professor Willem Hanekom. “Our partnership for World TB Day showcased up-and-coming young researchers, whose work will help guide us to new diagnostic tools, vaccines and drugs we so urgently need.”

The theme for World TB Day 2021 is “The Clock is Ticking.” It addresses the sentiment of the world running out of time to act on the commitments to end TB, that were made by global leaders. The United Nations’ End TB Strategy is tabled in the Sustainable Development Goals for 2030.

The World Health Organization’s End TB By 2030 report, published in 2017, outlines the framework for implementing this strategy in the African Region, which continues to bear a significant proportion of the global burden: “TB still remains a major public health problem due to continued high incidence, prevalence and mortality,” according to the report.

The impact of TB is pervasive and often devastating as a disease which places its heaviest burden on the world’s most poor and vulnerable communities, and so aggravating existing inequalities. The prevention and treatment of TB are critical responses of the framework.

The themed mini-symposium on “TB Research in the time of COVID-19” featured a series of short talks by eight emerging TB researchers from the two institutes. The opening address by AHRI’s Indira Govender set the scene for reflecting on the impact of the COVID-19 pandemic on TB research. The talks ranged from detection and transmission of TB to exciting new developments in TB pathogenesis.

Clinician-scientists, Linda Boloko and Simon Mendelsohn, and basic scientists, Cheleka Mpande and Ryan Dinkele, presented talks on behalf of the IDM. Boloko was recently awarded the Professor Bongani Mayosi Netcare Clinical Scholarship for 2021. Based at the Wellcome Centre for Infectious Disease Research in Africa, his scholarship will support his PhD research for the next three years. His talk was entitled: “Xpert MTB/Rif Ultra for diagnosis of M. tb bloodstream infection in patients hospitalized with HIV-associated TB.” M. tb (Mycobacterium tuberculosis) is the bacterium that causes (TB).

Mendelsohn, who is based at the South African Tuberculosis Vaccine Initiative (SATVI) which is hosted at the IDM, presented a talk entitled: “Prospective validation of host blood transcriptomic biomarkers for pulmonary tuberculosis in people living with HIV.” This comes at the backend of a paper he co-authored and had published in The Lancet Respiratory Medicine in 2020. Both he and Boloko are fellows of the Fogarty HIV-Associated Tuberculosis Training Programme led by IDM member Professor Graeme Meintjes from the Department of Medicine.

Mpande, a PhD student also based at SATVI focused her presentation on “Antigen-specific T cell activation distinguishes between recent and remote M. tb Infection.” Her talk featured highlights from a similarly titled paper she and others published recently in the American Journal of Respiratory and Critical Care Medicine.

Dinkele, a PhD student based in the Molecular Mycobacteriology Research Unit presented a talk entitled, “Capture and visualisation of live Mycobacterium tuberculosis bacilli from tuberculosis patients bioaerosols” which covered highlights from his recently co-authored paper published in PLOS Pathogens. The paper describes technological advances that will enable a deeper understanding of the dynamics of TB transmission.

Mbano’s talk, titled: “Single cell sequencing of human HIV/TB infected fibrotic lung tissue,” reflected on findings from single cell sequencing of TB-infected lung, focusing specifically on a potential mechanism underlying the immunopathological differences between TB and HIV/TB. Mbano’s work was recently applied in a paper in the journal Cell, which investigated the cells in the body targeted by SARS-CoV-2.

Ahmed’s talk titled “Sensing of Interferon-gamma by Mycobacterium tuberculosis,” presented novel findings on the interaction between and interferon-gamma; an essential protein regulating the immune response in TB. The work shows how M.tb increases respiration in response to IFN-g, most likely as a mechanism to sense the activation of the immune system and adapt to it. This may help to make drug treatment of TB more effective since isoniazid is more effective in the presence of IFN-g.

“Micro-computed tomography of the human tuberculous lung,” is the title of Wells’ talk. He presented ground-breaking work which uses micro/nano-CT scanning of the human TB lung, providing a much more detailed picture of the lung than regular X-ray. Micro-CT reveals that necrotic lesions can form complex branched structures because of dissemination and expansion within the airways. These results, recently published as a preprint, suggest that care must be taken when interpreting 2D microscopy of human TB lesions. Furthermore, that aerosolised drug administration needs to be reconsidered.

This event was an opportunity to hear about recent advances in TB research led by the next generation of the country’s research leaders, and to reflect on the impact that the COVID-19 pandemic has had on this field.

“The breathtaking pace and intensity of the research response to the COVID-19 pandemic has demonstrated what can be achieved when a combination of resource and political will are brought to bear on a global health crisis. We, as TB researchers in a high-burden country, must capitalise on this moment by raising awareness around TB and by demonstrating the importance of world-class research, to develop new tools to control this ancient disease that continues to plague humanity,” said Professor Valerie Mizrahi, the director of the IDM. 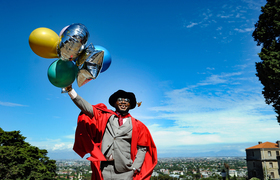 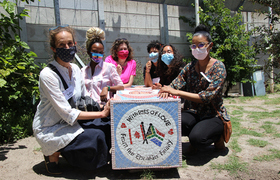