Emeritus Professor Tim Crowe reflects on the tenure of the late vice-chancellor (VC) of the University of Cape Town (UCT) Dr Stuart Saunders. Dr Saunders passed away on 12 February 2021 after a short illness.

Stuart Saunders was an outstanding UCT medical graduate and developed into a highly respected and outstanding physician/educator/researcher/administrator/residence warden and peacemaker. He earned the last title during apartheid states of emergency, internal violence and an international academic boycott, literally placing himself in the line of fire to keep security police off campus and protect students and staff.

Most importantly for UCT as an institution of international stature, Saunders steered it out of the apartheid era without falling off the path towards excellence in education and research. All of this was done at enormous personal cost and without compromising his principles and human decency. A telling condition in his letter of appointment as VC was to “have a special responsibility for maintaining a standard of conduct and discipline, questions of academic policy and the smooth administration of the university and its residences, and its management”.

For those genuinely interested in UCT’s history, his memoir, Vice-chancellor on a Tightrope: A personal account of climactic years in South Africa, is a must-read.

In 1977 VC Sir Richard Luyt head-hunted Saunders as his deputy principal for planning (DPP) to help put Daviean non-racial principles into practice. Saunders achieved this while catapulting UCT to the world stage in terms of research excellence by manipulating the “Old Boy" network and development/promotion of the National Research Foundation’s (NRF) researcher rating system. Key among these efforts was expanding Luyt’s efforts in fostering UCT’s world-first Centre for African Studies and establishing its AC Jordan Chair. These endeavours were largely funded personally by Chancellor Harry Oppenheimer and “Rhodes-derived” mining companies.

Let’s count some of the ways Saunders led UCT towards non-racialism while maintaining standards and developing excellence.

During his stint as DPP, Saunders took the unprecedented decision to publicly resign from the South African Medical Association to protest its handling of the brutal assault and murder of Steve Biko. Saunders’ first major executive act as VC was to defy the Group Areas Act by opening UCT’s student residences to all races. He dropped the title professor and reverted to his highest professional title, doctor, because a VC “professes nothing”.

A vice-chancellor has a great deal of power, but only as much power as he or she can achieve through actions, which result in him/her getting the confidence of the various sections of the university. The UCT Council professes policy, except for matters academic which are the concern of UCT’s Senate.

Saunders also raised funds to accommodate students of colour who were academically eligible for support. He broke, morally and financially, fertile ground by supporting the genesis of the Gay and Lesbian Association and massively developing the UCT Fund Inc (launched by TB Davie to help provide financial support for students of colour).

Furthermore, unlike his predecessors, Saunders met openly with all banned members of UCT’s community and made representations on their behalf to the Minister of Justice. When their banning orders expired, they were not renewed. He summarily fired an apartheid spy within his administration. He expanded Luyt’s elitist strategy on academic development, making it available to all who were eligible academically and promoted transformational approaches to teaching to foster UCT’s cultural diversity.

When the government threatened to cut UCT’s subsidy if its community did not stop protesting, he took the state to the Supreme Court and won. In 1989, while Nelson Mandela was still in prison, Saunders chaired a committee at UCT comprising all segments of the university and the African National Congress (ANC) that supported presenting him with an honorary doctorate in law. I could go on and on.

“He chaired, with great care, every selection committee for every professorship in every faculty.”

With regard to academic staffing, Saunders initiated decolonisation at UCT by aggressively pursuing the affirmative recruitment of staff of colour. His procedures in doing this were not uncontentious. One such recruitment in the Faculty of Science resulted in an unsuccessful challenge in the labour court by a disgruntled white contract staff member who alleged that he had been victimised by “affirmative-action” procedures. The two talented appointees [people of colour] went on to have highly successful careers at UCT.

Achieving this transformation required Saunders keeping his administrative finger on the pulse. He chaired, with great care, every selection committee for every professorship in every faculty. Unlike his predecessors and some of his successors, Saunders visited his departments annually and chose his senior supporting deputy vice-chancellor executive wisely. All were world-class researchers and educators. He met with them weekly, encouraged them to continue their research and debate with him and each other during his “Monty Python” meetings.

With regard to “decent behaviour”, Saunders took decisive action. When residents of Smuts Hall invaded Fuller Hall and urinated on a tree in its courtyard, he called out the entire Smuts Hall to account for their disgraceful behaviour. He forced them, one by one, to admit or deny charges of public indecency. In the end many admitted guilt and were fined – such incidents never recurred. In the early 1990s, when students colluded with striking workers who had kidnapped and assaulted uncooperative colleagues and attempted to barricade UCT, Saunders honoured his letter of appointment and expelled 16 of the most egregious offenders.

All of this was achieved within long-standing institutional structures: Council, Senate and Senate-sanctioned committees, faculties and the Students’ Representative Council. Saunders firmly held to the view that: “The governance of the university must remain the ultimate responsibility of the Council for all matters except those strictly academic matters which are the responsibility of Senate and where Council would be unwise to interfere. Any parallel which usurps those powers can only undermine the university and ultimately destroy it.”

In the end, Saunders left an institutionally largely non-racialised UCT. Like VC Davie, he was a principled principal who led by example and followed through on his promises. He preferred collegial relations within the university rather than managerialism. During the Saunders era, UCT’s student population grew from about 10 000 to about 15 000. During that time, the population of white students dropped and that of black students (especially women) increased from less than 300 to nearly 3 500.

If Davie gave heart and soul to UCT, Saunders gave it a spine and muscles. 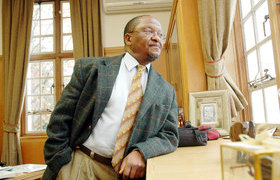 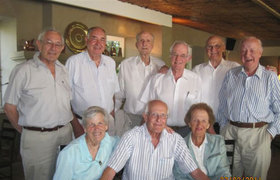 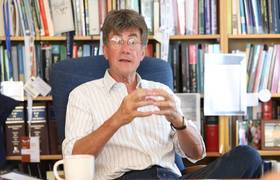 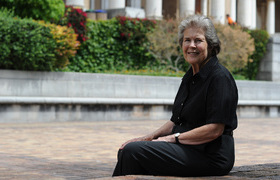