On 12 February 2021 the former vice-chancellor of the University of Cape Town (UCT) Dr Stuart Saunders passed away aged 89. Tributes have poured in, celebrating his contributions to the university and the broader higher education sector. Mary Burton, a former member of the UCT Council, a lifelong activist, the president of the Black Sash (1986–1990) and a commissioner for the Truth and Reconciliation Commission, pays tribute to him.

The first word that comes to my mind when I think of Stuart Saunders is “fierce” – not frightening, but fierce in his support for UCT at all costs; fiercely protective of its students; fiercely opposing them when he believed them to be in the wrong; sometimes fiercely questioning postgraduates being considered for bursaries to make certain they could defend their views (even if he disagreed with them); fiercely resisting government inroads into the freedom of the universities; and equally, fiercely defending the UCT campus from any attack.

His temperament, however, was not that of an angry man. His medical career bears testimony to his concern for those most in need. He was courteous to those with whom he disagreed.

“He served as vice-chancellor during turbulent years in South Africa and faced up to government interference, student protests and the pressures of leading the university into the new society.”

He was a good friend to those close to him. He was generous with his time and interest in all aspects of the university. During his long period of service as UCT’s vice-chancellor, he was utterly devoted to its welfare. After his retirement, he continued to foster its well-being by speaking nationally and internationally about the needs of all South African universities – their financial resources, their need for independence, and for scholarly integrity.

He served as vice-chancellor during turbulent years in South Africa and faced up to government interference, student protests and the pressures of leading the university into the new society.

He recognised the need for change and inclusivity, as evidenced by his drawing a wide diversity of people into leadership structures, perhaps most notably [former UCT vice-chancellor] Dr Mamphela Ramphele. His wisdom and foresight will be part of his legacy.

I have a particular memory of him, which is recorded by [Emeritus Professor] Howard Phillips in his history of UCT.

The city of Cape Town was in turmoil, the townships ravaged by unrest and violence under the oppression of apartheid. The Black Sash learned of serious destruction and arson in Gugulethu and other areas, and of brutal police repression. Its regional council decided to go witness these events and tried to draw public figures into doing so too.

We telephoned UCT to ask to speak to the vice-chancellor, who was in a meeting but asked [then deputy vice-chancellor] John Reid to talk to [Black Sash member and anti-apartheid activist] Dr Margaret Nash. The sense of urgency was so great that they responded with astonishing speed and were soon packed into cars, heading for the Gugulethu police station. The first people Dr Saunders encountered were a group of [UCT’s Students’ Health and Welfare Centres Organisation] nurses, overcome by emotion, and he swung into their defence and support. There, indeed, he was fierce, and senior police personnel quailed before him.

May he rest in peace after a life of service and dedication. 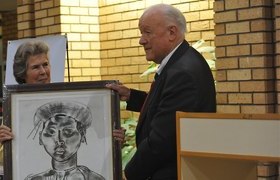