The University of Cape Town’s (UCT) has been flying at half-mast on Sarah Baartman Hall since Friday morning, 12 February 2021, as the university marked the death of Emeritus Professor Stuart Saunders, a dedicated servant, steward and supporter of UCT and vice-chancellor from 1981 until 1996.

Dr Saunders, who held the Chair of Medicine before becoming vice-chancellor at UCT, died peacefully in his sleep on 12 February 2021, after a short illness.

“Dr Saunders served the university exceptionally well for a remarkable 16 years as VC, playing a pivotal transformational role, and continued for many subsequent years to support the institution.”

“Dr Saunders served the university exceptionally well for a remarkable 16 years as VC, playing a pivotal transformational role, and continued for many subsequent years to support the institution,” said Vice-Chancellor Professor Mamokgethi Phakeng.

“After his retirement he continued to serve UCT in many ways, not least in fundraising abroad. This had a major impact on the lives of many disadvantaged students as well as on the university’s critical infrastructure and academic freedom.”

Notably, Saunders led UCT, for the most part, during the darkest days of apartheid. During those years, he also played a leading role in driving the university’s policy to provide internationally excellent education and to become a leading research university.

He recognised that for black students to succeed at UCT academic development, on-campus student housing and adequate financial aid were necessary. That he put these in place contributed to the increase in the enrolment of black students through the 1980s. Key to this was his action in opening residences to all (technically an infringement of the Group Areas Act) and the acquisition through the 1980s and early 1990s of additional student housing, including Liesbeeck Gardens, Forest Hill, Glen Res (the former Glendower Hotel) and Groote Schuur Mansions.

“He was an admirer of TB Davie and followed in Davie’s footsteps in opposing racially segregated universities.”

He was an admirer of TB Davie and followed in Davie’s footsteps in opposing racially segregated universities. He led the opposition to the “Quota Bill”, which would have imposed racial enrolment quotas on South African universities and was instrumental in ensuring that the Act, though on the Statute Book, was never brought into effect.

In 1987 he brought a successful Supreme Court (as it then was) action against the imposition of “conditions” that the Botha Government wished to attach to the receipt of subsidy. He supported student activists throughout the 1980s, and this stance brought him up against the apartheid state and police.

He steered the medical profession and university under apartheid, which is recorded in his autobiography, Vice-Chancellor on a Tightrope: A personal account of climactic years in South Africa (2000). The title refers to the balancing act he performed while leading UCT through politically chaotic years, what he calls in the book “a political storm”.

In addition to opening UCT’s residences to students of all races, Saunders is also regarded as being among those who played a role in putting an end to racially segregated training of medical registrars. He also resigned from the South African Medical Association after they failed to act against the district surgeons who were responsible for treating Steve Biko at the time of his imprisonment.

Saunders’ contributions to the university and higher education have been enormous.

“Stuart Saunders has been a major influence and participant in higher education for half a century.”

An excerpt from the citation read when he was awarded an honorary doctorate from the University of the Witwatersrand (Wits) in 2014 reads, “Stuart Saunders has been a major influence and participant in higher education for half a century in ensuring that the spirit and values of a liberal education survived in South Africa before 1994, and since 1994, in finding and channelling international resources to promote and enable research at South African universities.”

Even after he retired from UCT, Saunders remained an active part of the university. The most recent initiative is the annual Dr Stuart John Saunders Lecture, held in his honour annually for the past two years. The lecture was launched in May 2018 and was made possible by his late wife, Anita Johanna Saunders. Her intention was to pay tribute to the values demonstrated during her husband’s tenure as vice-chancellor and his impactful medical research.

He was instrumental (with Alan Pifer and the then Council Chair Len Abrahamse) in setting up the University of Cape Town Fund, Inc of New York and, in the early 1990s, in setting up the University of Cape Town Trust in the United Kingdom (UK). After retiring from UCT he continued to serve as a board member for the trust. Over a period of two decades, Saunders played an instrumental role within the trust, spreading UCT’s name in the UK specifically and in most parts of Europe.

“He was an indefatigable fundraiser and always insisted on helping other South African universities.”

In his role as a board member, he forged meaningful relationships and helped the trust to raise millions for the university from foundations, companies and individuals. He retired from the board of trustees in May 2012, a year after his 80th birthday. He was an indefatigable fundraiser and always insisted on helping other South African universities, in particular Wits and the University of the Western Cape.

Saunders also served as the president of the UCT Heritage Society. He founded the society in the mid-1990s to honour alumni and friends who had left a legacy – a bequest or provision – to the university in their wills.

His university leadership (as well as cutting-edge liver research) was recognised by local and international universities in the form of honorary doctorates. In addition to UCT, he was honoured by the universities of Aberdeen, Sheffield, Rhodes, Princeton and Toronto.

In 2002 Saunders was awarded The Order of the Baobab, a national honour for South Africans for distinguished service to their country. This speaks volumes, considering his immense and immeasurable contribution to higher education.

Of Saunders’ tenure and legacy, Professor Phakeng said, “Dr Saunders certainly navigated UCT through those stormy years, and as a result even in the many years following his tenure, the university remained on the right footing. His contribution to the institution, the medical field, the higher education sector and to society at large will always bear testimony to the great man that he was.

“We convey our heartfelt condolences to his children, Jane and John, the entire Saunders family and to those who knew or worked with him.”

1965 – Received degree of Doctor of Medicine from UCT 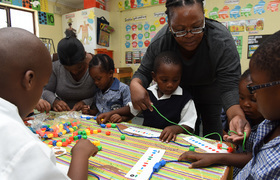 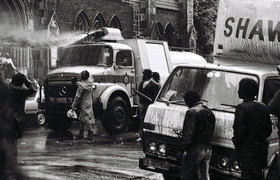 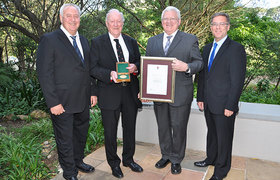