A time to build up

At the start of Dr Philippa Tumubweinee’s second year as director of the School of Architecture, Planning & Geomatics, she spoke to UCT News about her creative impetus, work and long line of “boss ladies”. The Ugandan-born architect and scholar is the first African woman to head a school or department in the Faculty of Engineering & the Built Environment.

Helen Swingler (HS): Is it significant that the intersections of identity, gender and leadership come together in your directorship of the school?

Philippa Tumubweinee (PT): The short answer, no. The long answer is a little more complex. I like to believe that the geography and physiology of my birth – both of which I am eternally grateful for – although significant, are not the only things that make up the person that I am and hope to become. Yes, I do see these determinants as significant for contextualising my journey but recognise that they are coupled with other things, such as my sites of imaginations, experiences and knowledges, which have shaped and lead me to where I am today. It is important, specifically in the context of the role that I am currently in, that this distinction is made.

HS: Interestingly, your UCT reporting line, from your dean all the way to the top, is women.

PT: The fact that my entire reporting line is made of women is super cool. When I look up the leadership and managerial ladder at UCT, from my rung in the School of Architecture, Planning & Geomatics, it feels like I am part of the super women factory – and it is as fascinating as it is wild. What has been valuable within this structure of women has been the privilege I have to see, experience and work with a range of difference in type, personhood, style and representation in my boss-lady chain of command. And if nothing else, my all-female chain of command has reinforced my belief that although geography and physiology are clear distinguishing markers, they do not make or determine why one is, who one could be and how one could be.

“It feels like I am part of the super women factory.”

HS: Looking at transformation in this sector, what is the likelihood of another woman following you as director of the school?

PT: In a post-1994 South Africa, architecture, seen as central and fundamental in the built environment sector, has seen a notable rise in the number of women who register for study across undergraduate and graduate levels. But the number of women in general and women of colour, in particular, who enter professional practice, let alone engage in teaching, scholarship and research at architectural learning sites (ALS), remains extremely low. In a special scarce skill of specialisation, women registered or in the process of registering as architects and/or architectural practitioners, according to the South African Council for the Architectural Profession (SACAP) website, are no more than 20% of the total number of registered professionals. The significance of this low percentage of women and women of colour who are registered or in the process of registering as professionals is of concern. It raises questions around the numbers and visibility of women in the profession – generally and at ALS.

HS: It’s a long-standing problem. Are there efforts being made to change this?

PT: The challenge is not new. For example, in 2014 Karuni Naidoo [an architect, Naidoo was the first black woman to graduate with a Bachelor of Architecture degree from the former University of Natal in 1988] started an initiative for women architects registered or in the process of registering as professionals. This initiative was taken up by SACAP in 2015 and formalised under the banner Women in Architecture South Africa (WiASA). WiASA’s initiation statement in 2015 highlighted the unacceptably low numbers of women in architecture, as well as the “extensive marginalisation of previously disadvantaged women”.

This highlights the immediacy of the need to encourage, support, educate, develop and create platforms and programmes for women in the profession and at ALS in particular. The dominant perception of architecture, its practice and education, as a male-dominated sphere, necessitates interventions and projects that focus on questions of gender inequality and the location of women in the profession.

HS: In the wake of Africa Month, it’s perhaps pertinent to ask how the school looks to contextualise itself within the African context in its approach to teaching and learning.

PT: The African context currently is one that I believe is filled with incredible amounts of dynamic excitement and developments. It is a context within which the importance of locality is growing. Discussions around what it means or doesn’t mean to be an African have been tackled over time by people such as Valentin Yves Mudimbe, Taiye Selasi and Ben Okri, among others.

I cannot speak for everyone in the school. Within a dynamic African context, teaching and learning should aim to define the specificities of locality so that they can move beyond the absoluteness of a fixed place and time. This absoluteness of place and time in its singularity limits and cartels freedoms for understanding ourselves and others that are not like us.

“This absoluteness of place and time in its singularity limits and cartels freedoms for understanding ourselves and others that are not like us.”

By moving beyond the limitations of the absoluteness of the term “African” we can, to reference Selasi, re- or un-define ourselves, our world, our work, our experience, beyond the logic of a singular state, region and/or continent. Within my teaching practice, I always aim to privilege knowledge through experience over state, region and/or continent, to allow for the development of an imagination and creativity that is particular to experiences and the spaces in which these experiences happen.

HS: In a recent interview, you quoted Stephen Covey: “Live out of your imagination, not your history”. Would you expand on this?

This way of living, within your imagination, brings with it a level of dynamism that is sublime. It allows for one to explore the intricacies of the minute and complex beauty of the broader network/organism at the same time. I am undoubtably seduced by the idea of imagination. For me imagination is creativity. It is within the imagination that representations of ideas and practices that would otherwise be thought to be impossible can be brought into being.

“I am undoubtably seduced by the idea of imagination.”

There is an urban architectural legend about a rather famous architect – now passed – Zaha Hadid. It is said, in the early years of her career, her imagination of what architecture could be could not be built because the technology and know-how to build it did not exist at that time. A decade or so later she went on to become one of the most prolific architects in the 21st century. Through her imagination, it can be said, she brought into being a practice and understanding of architectural form that was not thought possible. This is the power of imagination.

HS: Given the recent focus on Africa Month, what does it mean to you to be African?

PT: The short answer – everything. Simply put, I do not know how to be anything else. 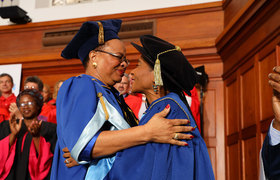 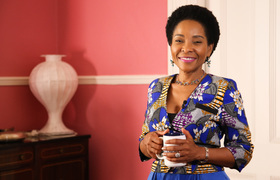