A trio of University of Cape Town (UCT) academics will share the UCT Creative Works Award this year: architect Clint Abrahams, and musicians Associate Professor Andrew Lilley and Associate Professor Dizu Plaatjies. The awards will be conferred at the respective faculty graduation ceremonies this week.

The UCT Creative Works Award recognises major artworks, performances, productions, compositions and architectural designs produced by the university’s staff. The award may also be made to jointly-produced creative works, but the UCT contributor must have played the most significant role.

An architect and academic in the School of Architecture, Planning & Geomatics in the Faculty of Engineering & the Built Environment, Abrahams has been recognised for his design-build exhibition, Macassar: “Who we are”, by Studio Light.

He is the founder of Studio Light, a non-profit organisation that forges mutually beneficial relationships between communities and higher learning institutions. Their goal is to explore and create socio-spatial restorative architecture.

“Who we are” explores this theme in the context of postcolonial challenges faced by displaced communities in South Africa. It counters dominant narratives by re-telling the stories of Macassar, a community characterised by crime and socio-economic challenges. The aim is to build community resilience amid conditions of hopelessness and public mistrust.

Abraham’s nomination reads, “In 2016, with no civic-institutional support, meetings held in Macassar living rooms and backyards developed into a street photography project involving youth from the area. This built new relationships, trust, and appreciation for their community, framing a new story for the area. Using found objects to curate the photographic material, a nomadic spatial practice emerged to sustain the project.

“In 2018, community meetings were held to plan hosting an exhibition in the public library and two private homes. The installations were built as participatory spatial interventions which resulted in shared (common) spaces for intergenerational dialogue. Stories by elders in response to images taken by the youth were included in the exhibition to instil new stories of hope and dignity.”

There are plans to make this a permanent exhibition within the community.

“This year the refurbishment of a community space, a collaboration between Studio Light, the community and four universities, will be a testimony to the relevance of Macassar’s story of resilience, that change comes from within.”

The award thus recognises not only Abrahams but a community.

“[It] valorises the efforts of people to self-organise to effect change in communities where civic-institutional support is often absent. Most of the work was executed in places not often visible and what kept the work going was the belief that [the] hard work was purposeful and would eventually be made visible in public,” he said.

“Everyone involved, from members of the community to students, has been positive about their personal experience of the project. The overall support has grown beyond our expectations. We’ve been encouraged to plan future spatial projects as a result of this work, with the promise of further transformation through knowledge exchange.”

Based at the South African College of Music (SACM), Lilley has been honoured for his album, Brother Gone, a compilation of original compositional works recorded for jazz septet. The project is the result of collaborations with the Arts Foundation in Sweden.

Swedish jazz musicians have strong roots in the Afro-American jazz tradition, which resonates with the South African context where the style of jazz music is also heavily influenced by this tradition. Innovators such as John Coltrane and Thelonious Monk became powerful influences in modelling some of the country’s greats: Abdullah Ibrahim, Winston Mankuku and Bheki Mseleku.

Lilley’s nomination reads: “The title track of the album speaks to this lineage, referring to the collective brotherhood in jazz and to those who have died, their legacies carried forward to produce something new … ‘Gone’ refers to having passed on but also acknowledges one of its brothers in saxophone and jazz legend, Wayne Shorter, who was often referred to as ‘Mr Gone’ by his fellow musicians.

“Titles like ʻEpilogueʼ and ʻDedicationʼ speak for themselves and ʻHome Rootsʼ particularly taps into that aspect of the heritage, which finds its origins in the rhythms of Africa. ʻSong for Bhekiʼ is written for South African pianist Bheki Mseleku whose contribution to South African jazz music is extensive.

“The title track of the album speaks to this lineage, referring to the collective brotherhood in jazz and to those who have died, their legacies carried forward.”

“By contrast, ʻYork Streetʼ refers to New York which was the hub of the most formative period in jazz and is still considered a Mecca for serious jazz musicians.”

These compositions on the album have attracted international status with “Song For Bheki” being awarded finalist for the original song in the 21st Annual USA Songwriting Competition in 2016.

Bringing the project to completion required time and funding for the hire of personnel and studios, said Lilley.

“The final release is a product of a multi-staged process in which the actual recording is only one part of the final artistic product. The music is written and composed over a period and performed as part of the creative and explorative improvisatory expression in jazz.”

Lilley is delighted by the award.

Plaatjies, head of the African Music section of the SACM, has been honoured for his multiple award-winning 11-track album, Ubuntu – The Common String. He is internationally renowned as performer, teacher and “intrepid researcher” of his African heritage with an extensive track record as a creative artist. This includes over 40 albums, both solo and collaborative.

His nomination reads, “Ubuntu – The Common String marked a new departure for Plaatjies. In the past he’d focused on the preservation of the vanishing music of the older generation of Xhosa musical bow players and vocalists.”

As arranger-songwriter and solo performer on a wide range of traditional African instruments, Plaatjies combines his artistry with that of younger musicians, who contribute a unique blend of vocals, guitar, percussion and horns. The result embraces a mixture of styles and inspirations from traditional, pop, rock, reggae and jazz – yet carrying the unmistakable stamp of Plaatjies’ Mpondo roots.

The nomination continues, “Recognising the need for generational dialogue, Ubuntu – The Common String is a conscious attempt to close the gap between the traditional and the contemporary by creating a music album that could jump across the divergencies of current musical genres. This attempt to place the music of his roots in the context of pan-African, popular and world music inspirations is what makes the album distinctive.”

Within a month of its publication in November 2015 the album reached and remained in the top 10 of the Transglobal World Music Charts for three months. It was subsequently included in its list of the best of 2015.

The peer-reviewed South African body, the SA Music Awards, voted the album as Best African Adult Album. At the same time, the prestigious British Songlines Magazine selected it as a Top of the World Album.

“To be recognised on home turf is just such a great honour – it means a lot not only to me, but to my family and my clan people.”

The UCT Creative Award is particularly special to Plaatjies.

“I have been lucky to be awarded [accolades] many times by bodies other than UCT. To be recognised on home turf is just such a great honour – it means a lot not only to me, but to my family and my clan people … This award is not an award for me alone, but for all those who have taught me and awakened my heart to music.”

The most fulfilling aspect of bringing Ubuntu – the Common String to fruition was being able to work with many young musicians and professionals from abroad, he said.

“It was synergy from beginning to end.” 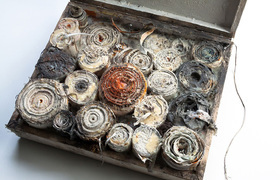