‘I am not leaving UCT, I am taking UCT with me’

In bidding a fond farewell to the University of Cape Town (UCT) community after her 20-year tenure, Chancellor Graça Machel reflected on two decades as the titular head of the institution. She says she is “at peace” knowing the university continues to prioritise and make progress with addressing sensitive issues like transformation.

Machel concludes her term of office at the end of December after being at the helm of the university for two consecutive terms. At the time of her election in 1999, she became the first woman to be appointed as chancellor of UCT and the first black woman to assume this role.

In celebration of Machel’s tenure and her contribution to UCT, the university has dedicated its summer graduation to her. She officiated her final graduation ceremonies on Thursday, 12 December.

During the afternoon ceremony, the university honoured Machel with a special tribute video. It marked some of her most memorable moments as chancellor and offered farewell and gratitude messages from several key role players within UCT, including Vice-Chancellor Professor Mamokgethi Phakeng and Chair of UCT Council, Sipho Pityana.

“I am not leaving UCT, I am taking UCT with me.”

“Today, we mark a moment of transition [at] our university as we bid farewell to Graça Machel. From the start, she motivated us to change. At her installation she said we should become producers of knowledge [and] to use our freedom to break the chains of poverty, ignorance and disease,” Phakeng said.

According to Machel, being at the helm of Africa’s top university has been both an honour and a privilege, but handing over the baton to incoming chancellor, Dr Precious Moloi-Motsepe, doesn’t mean she is leaving the institution.

“I have been thinking, reflecting on how this institution has enriched me. How it made me a more humane human being. I am not leaving UCT, I am taking UCT with me,” she said.

Machel told graduands, their families and members of the UCT community that at the time of her appointment – alongside then vice-chancellor, Dr Mamphela Ramphele – UCT became the first tertiary institution in the country and on the continent to have two black women at the helm.

That decision, she said, communicated a strong message to the university community and the country at large.

“[Back then] this institution [took] upon itself the responsibility to reflect the transformation required in South Africa, which was coming out of the traumatic experience of apartheid,” she said.

Looking back, she added, while the issue of transformation remains difficult and multifaceted, the institution continues to make giant strides when it comes to addressing transformation on campus.

But there’s still work to be done.

Despite these sentiments, Machel is satisfied with and proud of the diversity in gender, background and age she has witnessed while officiating her final graduation ceremonies.

“This morning [Thursday] I was sitting here and looking at the faces of those people who graduated in health sciences. I could see the transformation we achieved,” she said.

While there’s been progress on multiple levels at UCT since her installation, the university still has a long way to go. And this journey of change, Machel said, relates mainly to transformation on an academic level.

“We have a long way to go when it comes to faculty.”

“We have a long way to go when it comes to faculty, and quite understandably. Those brilliant minds who are receiving their PhDs are the first in their families to achieve this,” she said.

“They have brothers and sisters to educate first.”

Handing over the chancellor’s chair to Moloi-Motsepe is continuing a trend first started at the university two decades ago between Machel and Ramphele.

And, with Phakeng as vice-chancellor, she said she feels like she’s experiencing a bit of déjà vu.

“Today, [two] highly qualified, extraordinarily dynamic, exceptionally brilliant women are at the helm of the institution,” she said.

“I smile, I am smiling because it’s a kind of a cycle we started. Other universities have it, but we are the first and we are renewing it.”

Machel urged UCT staff and students to continue to lead by example, to give their best – not just in teaching and learning, and research, but in serving the nation and the continent.

“We still have challenges, but we are absolutely [going in] the right direction. Thank you for having enriched me and [making] me a better human being, a much humbler human being.” 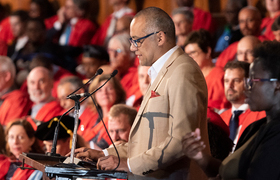 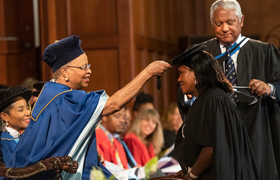