It is with deep sadness that we learned that Reinette Popplestone, retired manager of the Disability Service in the University of Cape Town’s (UCT) Office for Inclusivity and Change (OIC), died in Cape Town on 25 July 2019, aged 67, after being a lifelong cancer survivor.

The many tributes received express the great sadness felt by those who benefited from her warm heart, vast compassion and total commitment to the growth and success of the students with disabilities whom she interacted with closely. Reinette’s grace, courage, intelligence, determination to succeed and wit were well known on the UCT campus.

Reinette, born Catherina Aletta du Plessis, was diagnosed with retinoblastoma at six months old, and it was at that tender age that she was left blind as a result of the first of many, many operations in a lifelong struggle with cancer. She was educated at the Pioneer School in Worcester, matriculating with a first-class pass in 1969, and then attended the Royal National Institute for the Blind’s North London School of Physiotherapy, obtaining a Chartered Society of Physiotherapy diploma in 1973. On her return to South Africa, she settled in Cape Town where she practised physiotherapy in one of the large state hospitals.

In the late 70s she met and married her husband, Tony. They had two children, Kirsty and Kieron. Her children were the light of her life, and she would not hesitate to tell everyone who knew her that they were her reason for being. Kirsty now has a successful professional career involved with technical support and training in the radiography sector. Reinette and Tony were devastated by the loss of their son Kieron, who passed away at the age of three. Reinette remembered and continued to express her love for Kieron and her sadness at losing him through frequent anecdotes about him right up to the time she died.

Reinette’s long association with UCT began when she attended the university as a student, obtaining her BA in 1987 in English and Afrikaans/Nederlands. In her first year she won the class medal for Afrikaans/Nederlands and obtained a first in English. She progressed to obtaining her master’s in literary studies, also with distinction. Reinette served as the national Braille consultant from 1996, where she was involved with Braille code development, Braille production and materials development for Braille teaching.

Reinette returned to UCT in July 2000 to take over as head of the Text Conversion and Assistive Technology Service (TCATS), which was part of the Disability Service. From the modest tape-recording facility Reinette founded in 1991 in the front room of her home, this unit had grown into a well-established information facility for visually impaired students at the university.

Reinette took over from Mike Watermeyer as director of the Disability Service in the mid-2000s. Under her direction the Disability Service expanded its support to students who were Deaf or hard of hearing, including sign-language interpreters; loop technology in most of the large lecture venues; human support, such as note-takers for students with limited hand function, and scribes in tests and exams; students with mental-health conditions; and students with specific learning disabilities, including autism. Reinette used to say that it seemed that her whole life had been in preparation for running a disability unit. She understood the academic requirements and knew deeply about accessibility challenges.

Reinette served on many committees dedicated to the advancement of Braille and literacy for blind people and wrote a Braille tutor entitled Hands On, which became the braille teaching manual for all 11 official languages in South Africa. Reinette described herself as a voracious reader and was a member of the South African Library for the Blind since she was nine years old. Reinette stated both privately and publicly on numerous occasions her belief that the ability to read and to use information technology in all its forms is the single most important factor determining the quality of the lives of people who are visually impaired.

Internationally she participated in the activities of ICEB, the International Council on English Braille. She was a member of the board of St Dunstan’s Association for War-Blinded Veterans and was the driving force behind the establishment of HEDSA (Higher and Further Education Disability Services Association).

Reinette had a warm and kind heart and she could never say no to any request, especially when it came to students with disabilities and the staff she worked closely with. She had an ability to identify concerns and listen deeply with her heart filled with compassion. Reinette loved music, had sung in choirs and loved to have music playing while she worked. Her concern was always to make sure that students and staff received the best accommodations in order to excel at the university.

“Maybe it’s not even about getting a job. It’s about becoming a different person. And that is certainly what it’s done for me. That is the real worth of a university education. You discover who you were meant to be.”

She was a hard-working, gifted person who had flair, compassion and a deep love of serving others. Reinette was a person who openly shared her triumphs and challenges with friends and colleagues. She catalysed response in others, and many of us can attest, through easy as well as challenging times, how she motivated us to find our best selves. Through her Orientation Advocacy talks over the years, Reinette communicated with thousands of students, sharing her insights with characteristic humour and warmth.

Reinette’s name in the Disability Service was “Mama”, and the adoption of her foster child, Rowan, was a source of deep joy for her. This story is documented in the film Kom Haal My (Come Get Me). Fifteen years ago she and Tony took Rowan, a severely disabled baby boy, into foster care and raised him as their own. Reinette’s life was defined by compassion, humanity and her love for others. She had a boundless capacity for empathy and concern for others, particularly for those who, for whatever reason, found themselves unjustly marginalised or struggling. In the last 15 years or so, caring for Rowan gave meaning to Reinette’s life, but sadly earlier this year she had to find another home for him when, becoming more and more ill herself, she could no longer cope with his very special needs. Again, she was devastated.

Reinette deeply loved her family, and our condolences go out to her husband, Tony, daughter, Kirsty, and son, Rowan, and to all her friends who cared deeply for her. She will be sorely missed, not only for her significant contribution, but for the beautiful human being she was.

We will never forget Reinette.

The family invites friends and colleagues to a gathering that celebrates, marks and remembers Reinette's life.

Dress: Casual or as you come

Everyone is encouraged to participate in a memory-sharing space by sharing their own wonderful memories of Reinette. 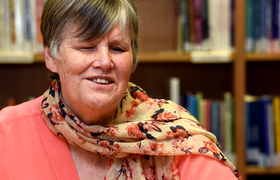 News
Popplestone: A masterpiece written in the margins 14 Nov 2016