In a first for South Africa, a urine-recovery urinal system, developed in the University of Cape Town’s (UCT) Department of Civil Engineering, has been incorporated into the design of Growthpoint Properties’ new corporate headquarters for Exxaro in Centurion.

Built to accommodate 1 100 people, the nine-storey, R600-million building opposite the Centurion Gautrain Station has also won an innovation star from the Green Building Council of South Africa.

Even more innovative is the on-site fertiliser recovery urinal, which was developed by UCT civil engineering graduate Craig Flanagan and earned him a Greenovate Award in 2017. Flanagan’s research was supervised by Department of Civil Engineering senior lecturer Dr Dyllon Randall, who is also part of UCT’s Future Water Institute.

Rudolf Pienaar, chief development and investment officer at Growthpoint Properties, said: “Green innovation at university level is changing our built environment. By incorporating the fertiliser-producing urinal concept into a major commercial office, it has changed Growthpoint’s thinking on how it develops new buildings.”

“By incorporating the fertiliser-producing urinal concept into a major commercial office, it has changed Growthpoint’s thinking on how it develops new buildings.”

He added: “UCT has dominated the [Greenovate] competition each year in the four years since it was launched in 2015, winning both the prestigious Greenovate Property Award and the Greenovate Engineering Award in 2017 and 2018, and demonstrating continued outstanding leadership in environmentally innovative thinking for the built environment.”

Flanagan’s award-winning project investigated the on-site production of fertiliser from urinals installed in UCT’s New Engineering Building. He designed and constructed a “temporary” urinal housing calcium hydroxide, which produces calcium phosphate (a type of fertiliser) when urine collects in the container.

The odour usually associated with stored urine was addressed by manipulating pH levels with calcium hydroxide. This allowed for long usage and storage times.

From one urinal, Flanagan collected 100 litres in 22 days. The solid fertiliser that had collected in the bottom yielded 11 grams of fertiliser per kilogram of urine collected. The urinal recovered over 97% of the phosphorus present in the urine as calcium phosphate. (Phosphate is a key ingredient in fertilisers that underpin commercial farming worldwide.)

“This work has demonstrated significant potential for nutrient recovery from typical ‘waste’ streams such as urine, thus offsetting the need to mine for phosphate rock.”

This is significant because natural phosphate reserves are running dry, and some researchers predict that “peak phosphorus” will be reached in the next 50 years.

“This work has demonstrated significant potential for nutrient recovery from typical ‘waste’ streams such as urine, thus offsetting the need to mine for phosphate rock while also creating a sustainable and environmentally friendly process,” said Randall.

The urine-related work currently being led by Randall has garnered significant international exposure, having resulted in the world’s first bio-brick grown from human urine and, more recently, over R5.56 million of funding from the Royal Society as part of the Future Leaders – African Independent Research (FLAIR) fellowship. 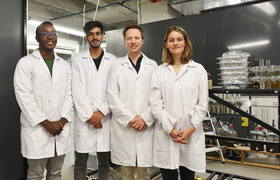