SS Mendi: ‘Our story, our tragedy’

History provides the opportunity to learn from past mistakes, to avoid repeating them, and to begin to heal a deeply wounded society, University of Cape Town (UCT) Vice-Chancellor Professor Mamokgethi Phakeng said in her tribute at the official SS Mendi Memorial ceremony on Sunday, 24 February.

“Their story is our story. By embracing them, we take a step towards healing the wounds that remain so long after they died,” Phakeng said of the tragedy and the role it can play in helping to heal the country today.

She was addressing members and veterans of South Africa’s armed forces, students, wardens and representatives of the British army.

The annual commemoration pays homage to the 616 South African soldiers and 30 British crew members who died aboard the military steamship, the SS Mendi, on 21 February 1917, when the vessel sank in the English Channel. It was struck by a much larger cargo ship, the SS Daro. The South African men were members of the 5th battalion of the South African Native Labour Contingent en route to France, to support the war effort.

Phakeng said that while the SS Mendi tragedy is remembered for different reasons, all are important, including the issue of context.

“South Africa’s recent history is connected to the events of the First World War … [which] was not only a conflict between colonial powers but it also helped to stimulate African nationalism and even pan-Africanism.”

Another important reason to remember the SS Mendi tragedy is that it is “one of many human stories of the 20th century that illustrate the struggle in South Africa against racism and for equality, human rights [and] dignity”.

Phakeng spoke of the tragedy against the backdrop of the Natives Land Act of 1913, connecting to the current land debate.

The men had spent their last night on South African soil at a campsite on what is now UCT’s lower campus. The site, near Graça Machel Hall residence and the UCT Fitness Centre, is today the SS Mendi Memorial.

“[This] land was originally inhabited by the Khoisan, the people of Sarah Baartman who was taken from her home,” she said.

“Colonialists later farmed this land and it became the legacy of Cecil John Rhodes. Not far from the site of the memorial, we have in the past uncovered the graves of slaves who worked this land.”

When the Mendi men spent their last night in South Africa, the property was known as the Rosebank Showgrounds.

“Now, the land is part of UCT which belongs to all of us South Africans. And so too, we honour the 616 Mendi men who spent their last night in South Africa on this spot,” said Phakeng.

“This is testimony to the power of these men’s stories that today we are moved by their great loss and are seeking ways to connect to them.”

In addition to enriching current debates about issues such as land and race, the story of the SS Mendi men has permeated South African culture.

“Their tragedy is our tragedy too. They contribute to our history, our heritage, our identity as South Africans,” she added.

One of the ways in which they live on is in the lyrics of South Africa’s national anthem, Nkosi Sikelel’iAfrika.

Phakeng cited writer Mothobi Mutloatse’s notes on the Sesotho verse in the anthem. Mutloatse wrote that Moses Mphahlele, who wrote the lyrics, was influenced by the Mendi tragedy.

Similarly, said Phakeng, the SS Mendi has become a topic of South African literature, drama, art and poetry. Examples include SEK Mqhayi’s The Sinking of the Mendi, a performance of SS Mendi by the Isango Ensemble, and Walter MB Nhlapo’s The Mendi.

“This is testimony to the power of these men’s stories that today we are moved by their great loss and are seeking ways to connect to them.

“As I have said before at some of my talks here at UCT and outside, the past is part of our future; we cannot move forward without understanding and dealing with the lessons of the past.”

Lessons from the Mendi

The Mendi lessons include paying tribute to all those who served and suffered, recognising individual experiences and taking the opportunity to right past wrongs.

“By taking ownership of what happened in the past – good or bad – we make it part of our present-day commitment to transformation based on compassion and the recognition that we need to heal the wounds that have been left in all of us by this tragedy,” she continued.

In remembering the “people of the Mendi”, Phakeng also paid tribute to the women, children, families and community members who were left behind by those who died in the tragedy.

She also emphasised the importance of remembering the men and their families as “individuals with different histories, different emotions and experiences”.

“If they could speak to us today, those 616 men who died would each have a different story to tell of what they experienced before embarking on the Mendi, during the voyage, and on that last terrible day in the sea.”

One of the main lessons is in how long it took for the Mendi men to be honoured.

In March 1917, on receiving news of the tragedy, then South African Prime Minister Louis Botha and the House of Assembly rose in silence. It was an unprecedented move by the colonial regime but was the last such tribute to the black soldiers. It was only under the democratic government that tribute was again paid, the most recent example of which is President Cyril Ramaphosa’s visit to the memorial site on Armed Forces Day.

“The honour these men deserved for such a death in the service of their country was long overdue,” said Phakeng.

“May it never happen again that South Africa neglects our fallen because of racial prejudice.”

“The honour these men deserved for such a death in the service of their country was long overdue.”

A religious service followed the Vice-Chancellor’s tribute, led by Padre Pierre Roux. Roux used the opportunity to speak about love.

“It took love for us to be here,” he said, adding that no one should wait for the next memorial to say “I love you” to those they care about.

The wreath-laying and lament marked the final part of the memorial.

Members of three UCT residences were in attendance to pay tribute, with representatives from Leo Marquard Hall, Baxter Hall and Kopano residences all laying wreaths.

“It is touching to see the respect for our fallen soldiers even though it happened so long ago. It still permeates the fabric of the military community and the greater South Africa.”

Kopano house committee member Elam Nukani said it was an honour to be part of the memorial.

“As a young South African, it is good to see that the old veterans and so forth still pay respects to those who came before them… Look up to them for doing that,” he said. 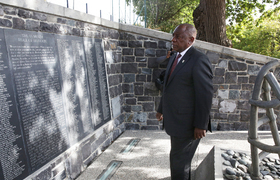