Excellence worth pursuing – but not always benign

Excellence in academia needs to be grown and groomed, but it also needs to be critiqued, Vice-Chancellor Mamokgethi Phakeng said at the recent Open Book Festival in the city. Phakeng was in conversation with feminist author Professor Pumla Gqola, dean of research at the University of Fort Hare.

Their topic for the ‘Conversations That Matter’ session was decolonising academia, although their exchange included several allied threads: Phakeng’s experiences as Vice-Chancellor at University of Cape Town (UCT), her vision for the institution in the next five years, and hurdles in the university’s decolonisation process.

While the notion of excellence differs between academic institutions, Phakeng said it is worth considering how excellence should be driven and how it should be recognised.

“Excellence is taken for granted. You sink, or you swim, and everybody seems to be wanting to work towards it,” she said of UCT.

However, it could marginalise those who feel they aren’t achieving the same heights.

“More than anything, we should recognise the complexity attached to excellence. We should recognise that it’s not benign. It can be hurtful. It can marginalise. It can silence. It can sideline … We need to have a conversation about why we [UCT] want to pursue it and how we create an environment that enables it.

“We should recognise that it’s not benign. It can be hurtful. It can marginalise. It can silence. It can sideline.”

“You find highly competent people very frustrated about the fact that they’re not being recognised. [Excellence] doesn’t happen on its own.

“We recruit the best students in the country… If you’re short of two points we suggest you go next door. And when they don’t do well nobody goes back to say, hey, this is the crème de la crème, why are they feeling such pressure? It’s an environment where we need to challenge ourselves.”

Asked about the nature and role of academic leadership, Phakeng said there were different kinds of leadership in higher education institutions with executives performing one role and academics another, though often not as well recognised. She believes her combination of scholarship (she is a professor in mathematical literacy with a National Research Foundation B rating) and her management experience are essential to her role as vice-chancellor at UCT.

“My job as executive is given credibility, strength and legitimacy because of my standing as a scholar… When we talk about the rating system or applying for grants, I know what the business is. I’ve played that game.”

Phakeng attributed her career trajectory to the combination of teaching, research and management, and how these things connect and feed into one another.

Good leaders, whether executives or academics, are those who give their institutions and people a vision of the “new land” – and can take them there.

In Phakeng’s response to Gqola’s question about the “landmine” she had inherited – an institution in the first throes of decolonisation and in the aftermath of Rhodes Must Fall – she said she had initially been reluctant to apply for the post. She’d known how “brutal” the process would be.

“The process is so public, it’s excruciating. It’s much easier to apply as the CEO for some corporate.”

It was the late Professor Bongani Mayosi, former dean of the Faculty of Health Sciences, who challenged her to take the responsibility of steering transformation of the continent’s foremost higher education institution. She had the status and academic credentials, he said, and had promised his support.

Having worked at UCT for the past two years, Phakeng said she’s learned that most people within the university realise the importance of decolonising and transforming the institution.

“As VC you talk to this group and that group and you realise we all want the same thing, but perhaps in different ways. The difficulty is how to get there.

“Some people think decolonising means breaking the whole thing down to the floor; burn it down and let’s start afresh. Others believe we don’t need to do that. We can decolonise but keep the things we need and renew what we have.”

Institutional culture is a tougher nut to crack, she added.

Comparing her experiences at the University of the Witwatersrand and UCT, Phakeng said: “There are ways of being and interacting that are very different. There are ways of ‘being’ and ‘seeing’. You can make someone feel disrespected without saying anything … It’s in intangible ways.”

Joking about the likelihood of UCT employing “one or two” robots by then, Phakeng outlined her wish list. First would be financial sustainability through income generation and using UCT’s brand to support students, pay staff and academics, and relieve the financial anxiety universities feel.

“I also wish for a greater [UCT] presence in Khayelitsha, Worcester and Philippi that’s not a mobile clinic.” 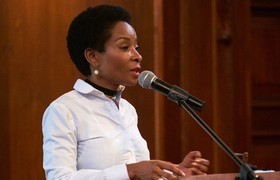