Graduations are celebrations, but few realise the struggles that many students face in getting across the line. Faculty ‘distress funds’ can make all the difference to students like Engineering & the Built Environment’s (EBE) Nkululeko Dlamini.

When the third-year student was found sleeping in an engineering lab – thin, hungry and penniless with his meagre belongings crammed into a small backpack – no one could guess how things might turn out for him.

As a child, Dlamini attended a poorly resourced school in Tsakane township, east of Johannesburg, where he was part of a school feeding scheme. When he came to UCT, he struggled with English. And the death of his mother at a critical time in his studies, which left a vulnerable family, was a huge setback. Without financial resources, he was sure he would never graduate.

It was the Engineering & the Built Environment’s Student in Distress Fund and an academic mentor in Ernesto Ismail that enabled him to put his life back together and complete his studies.

Today, Dlamini works for the Central Energy Fund (CEF) group on a clean energy project. In an email to the faculty, he wrote, “I would like to thank you for everything, for playing a big role in my life. Today I am the person I am because you also believed in me. This is the beginning of my career and I will grab the opportunity with both hands and I will ensure that I will continue developing myself to become one of the greatest leaders in the country.”

Help as a hand up

Sometimes it’s a fee deficit as small as R6 000 that stands between a student being able to graduate and stalling at the finish line.

The Student in Distress Fund, along with counselling students receive when they get funds, plays an important function in the engineering faculty, said dean Professor Alison Lewis.

In a report on the fund for 2017, Lewis said, “It might not be a huge amount of money, but it helps us deal with cases that might fall through the cracks and we are able to intervene in a flexible way.”

Student feedback such as this is testimony to the fund’s value: “There’s a Zulu saying that says, ‘ngiswela imilomo yokuzibongela’  that simply means I’m out of words to say thank you.”

“There’s a Zulu saying that says, ‘ngiswela imilomo yokuzibongela’  that simply means I’m out of words to say thank.”

Last year the fund assisted 76 engineering students with their individual needs, at a cost of R383 000. Some aid was provided as a once-off, while other funding assisted students over a longer period, says faculty marketing and communications manager, Mary Hilton, who administers the programme.

The distress fund has been a very important resource in these cases.

Hilton says, “This year we bought seven laptops for students who were living off campus and found it difficult to access information during the [student] protests. Several Zimbabwean students were unable to get money out of Zimbabwe, and we assisted with rent and food.

“All the students who have been assisted are eager to give back to the fund once they are on their feet and earning money.”

The faculty relies on 21 regular benefactors in alumni, friends and staff for the funding. They also received a donation from industry and R100 000 from the Vice-Chancellor’s Challenge Fund.

The Student in Distress Fund was launched in 2015 with a fundraising campaign, supported by the faculty’s student council, which raised R6 600 from fellow students. Staff and alumni also assisted and the fund was able to help its first six students.

Hilton provides a backdrop: “With the poor economic climate, the changes in the criteria for NSFAS funding and family circumstances that change, there are a number of EBE students who find themselves with no money for food, accommodation, or just basic necessities.”

Two other EBE graduands who were assisted through the faculty’s fund will be capped during the graduation ceremonies in April. 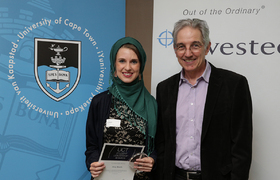 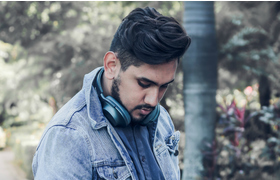 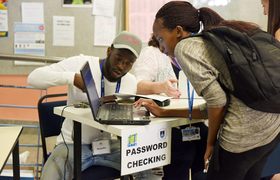