Cape Town did come together to save water

When people are called upon to rally around a “public good” such as conserving water, they are more likely to do so if they believe they are working together to achieve a common goal. Despite the finger-pointing and appearance of panic in drought-stricken Cape Town, citizens in this apparently divided city are showing unprecedented levels of co-operation.

As of February 2018, Cape Town’s residents must cut their water consumption drastically, as the region’s dams run critically low following the worst drought in a century. The daily ration is now down to 50 litres per person, per day.

The City also recently announced the possibility of Day Zero, the emergency measure it will take should dam levels drop to their last accessible 13.5%, when the municipality will cut all running water to homes and businesses. While critical services, such as hospitals, will receive running water, citizens will need to collect a daily ration of 25 litres of water per person from 200 communal delivery points around the city. At current water usage and dam levels, Day Zero is expected to arrive on 9 July.

But can Cape Town avoid Day Zero? This depends on whether people believe that others are making equal efforts to save water.

But we know that individuals will usually contribute more to a public good if they see others doing the same, or even if they just believe that others are contributing to this common cause. This is the principle of reciprocity. At the same time, if too many people free-ride, then it breaks down trust, people stop co-operating towards the shared goal, the resource isn’t conserved, and everyone suffers.

Over the last few years, the City of Cape Town has adopted a number of demand-side-management interventions to reduce residential water consumption, including water restrictions, media campaigns, dramatic tariff increases, and interventions by the mayor to target high consumers. Our team at the Environmental Policy Research Unit (EPRU) worked with the City to run a series of “behavioural nudges” to encourage voluntarily water-wise behaviour among residents – for example, sending targeted messages comparing a household’s consumption to the average consumption in their neighbourhood.

Our latest analysis shows positive responses to the combined effect of all these measures.

Consumption down by nearly half

Capetonians have achieved remarkable water savings. We looked at water use across 400,000 free-standing households, to analyse water consumption behaviour. The median water use dropped by nearly 50% in just three years, from 540 litres per household per day in January 2015, to 280 litres in January 2018.

As restrictions tightened, people have worked harder to meet the City’s water reduction targets. When the recommended usage of 10.5 kilolitres a month or less, per household, was introduced in July 2017, on average 63% of households were reaching that target. Remarkably, then, even before the new recommended use of 6 kilolitres per household came into effect in February 2018, 30% of households were already reaching this target.

A ‘divided' city is working together

There has been a great deal of finger-pointing across the city, as people blame one another for wasteful water use, non-compliance, and apparent free-riding. But our analysis tells a different story, one that shows just how much the drought has brought Capetonians together, rallying them around this common cause.

“The worst possible outcome right now would be if people lost faith in each other’s ability to safeguard the remaining water as part of a common pool resource.”

Four years ago, water use across households in different income levels was considerably different: richer households were drawing much greater volumes from the municipal system than poorer households were. But in recent months, as restrictions have tightened, we see a dramatic change in consumption, particularly among the higher income households, while lower income groups, who don’t have as much scope to cut their use further, have always had rather low levels of water consumption.

The graph below shows how, by this January, wealthier households have reduced their consumption to the levels of poorer households.

This reduction is partly explained by the fact that wealthier households are able to move partially off municipal supply, through drilling boreholes and well points, and investing in rainwater tanks, which has helped push Day Zero back to early July.

An important take-home message here as far as inequality in the city is concerned: the blame game that has dominated media forums is largely inaccurate and counterproductive, as it perpetuates free-riding and selfish behaviour which threatens this common resource pool.

The worst possible outcome right now would be if people lost faith in each other’s ability to safeguard the remaining water as part of a common pool resource, and instead start withdrawing water from the municipal supply for their own bulk storage.

It’s crucial, therefore, that we signal to citizens that their efforts are working: that we are co-operating, and that our communal efforts are actually working to push back Day Zero.

Prof Martine Visser is a behavioural economist and the director of the Environmental Policy Research Unit (EPRU) at the University of Cape Town’s School of Economics.

Johanna Brühl is a behavioural economist and researcher with the Environmental Policy Research Unit (EPRU) at the University of Cape Town’s School of Economics. 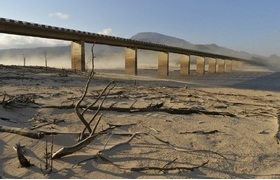 News
Making it through the water crisis 28 Feb 2018 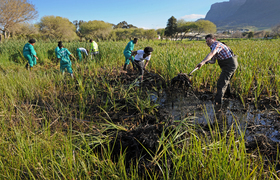