Even when it literary is, history isn’t always cast in stone.

That maxim works as a subtext for the third edition of Dinosaurs, Diamonds & Democracy: A short, short history of South Africa by UCT’s Emeritus Professor Francis Wilson, published earlier this year.

With the first edition of the book, published in 2009, Wilson had done the improbable. In a mere 128 dinky pages, he had painted a painfully researched and absorbing timeline of South Africa, covering some two billion years, starting with an asteroid crashing into what would become Vredefort, Gauteng, and closing with the troubled teen years of South Africa’s democracy.

But a lot has passed since the book first came out. (A second edition in 2011 had only nominal updates.) For instance, there have been high-profile archaeological finds, notably the discovery of fossil bones of early humans since dubbed Australopithecus sediba and Homo naledi, announced in 2010 and 2015 respectively. And, of course, the country’s more recent history since colonisation is constantly being revisited, reinterpreted and freshly debated.

“In South Africa, it has been said, the interpretation of history is even more controversial than the analysis of the present,” Wilson writes in his introduction to the new edition. “Be that as it may, what is certainly true is that the understanding of even the remote past changes with astonishing speed.”

This third edition, now up to 144 pages, also allows Wilson to spend more time and space on the country’s ever-deepening poverty and inequality woes. The focus is understandable – Wilson is emeritus professor of economics at UCT, and famously co-authored with Mamphela Ramphele the Second Carnegie Report on Poverty in South Africa in 1984. He is currently leading a third such study, now known as the Mandela Initiative. In the book he writes, for example, on the promise of the digital revolution for the country’s poor, but how it has also created “bipolar political economies with jobs for some and unemployment for many others”.

The new edition also creates new opportunities. Wilson and publishers Umuzi, an imprint of Penguin Random House South Africa, finally got to translate the book into at least a few other South African languages. They decided to test the water with isiXhosa and Afrikaans, the two dominant languages in the Western and Eastern Capes (Wilson hails from the latter).

The proposal to translate the book had been floated as far back as the first edition, but the publishers first wanted to see how well the book would sell, Wilson recalls. Now confident of the market for an Afrikaans edition – Dinosourusse, Diamante & Demokrasie – the publishers brought on writer Aniel Botha to do the translation.

The isiXhosa edition – IiDanaso, Iidayimani, neDemokhrasi – took more elbow grease, however. Wilson, firstly, had to ask around for funding for the translation, finally getting a friend in business to foot the bill.

And the translation itself, by acclaimed writer Sindiwe Magona, who Wilson approached for the job, demanded lots of toing and froing between author and translator, Wilson explains. The two had to spend hours together working on, especially, the proofreading. (On 6 September, Wilson and Magona will speak of the process at the Open Book Festival.)

“I had some idea of the words, but the only one who could really proofread the book was the translator.”

The book, Wilson says, now has a greater chance to reach different audiences in the country, beyond the English-speaking market.

“With the new South Africa of 1994, we needed to have a common history that we could all accept, so that we all have a single history in our head,” he says of his objectives for the title. “And one needed to write an accurate history, warts and all.”

Dinosaurs, Diamonds and Democracy offers a short first step in that direction. 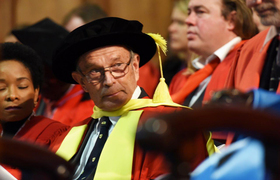 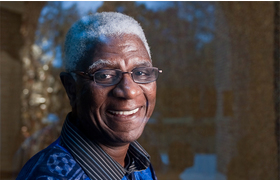 News
UCT to honour leading academics in African art, archaeology and economics 12 May 2016