You've been a refuge for the poor'

Have your hearts on fire and your brains on ice. This was the message Emeritus Professor Francis Wilson left graduands with after he was conferred with an honorary doctorate at the morning ceremony on 14 June 2016.

Some 380 Commerce graduands were capped at the eighth ceremony of a bumper June graduation week and the audience was treated to an address by one of the stalwarts of their discipline. Wilson rose to the podium to share some of the insights he'd gained from a lifetime of studying, and fighting exploitative labour practices, poverty and inequality.

'The stars were aligned'

Professor Marian Jacobs, former dean of the Health Sciences faculty, delivered the citation as Wilson was conferred the honorary degree.

Jacobs said that this Bible verse captured the focus of Wilson's life and work.

The economics doyen spent more than 30 years teaching at UCT's School of Economics, where he made seminal contributions to unearthing the exploitation of South Africa's migrant labourers, particularly in the gold mines. He founded and directed the Southern African Labour Development and Research Unit and published a bibliography's worth of books, book chapters and journal articles on labour, poverty and inequality.

Wilson's work took him not only to India to study migrant labour, said Jacobs, but also to France where he worked as a migrant labourer for several months, “placing 172 screws on each of 17 trucks daily”.

Hailing from an academic family (his parents Godfrey and Monica were both anthropologists), Jacobs noted that the young Wilson seemed destined for a scholarly life.

“The genealogy was there; the stars were aligned.”

Wilson once set out on a journey of a slightly different kind. In 1972, he was one of eight 'pilgrims' who walked from his native Grahamstown to Parliament to protest against migrant labour and the pass laws.

From that time onwards, Wilson used his academic position to undo the exploitative and poverty-generating system of migrant labour in South Africa. He chaired the prestigious International Social Science Council's Scientific Committee of the International Comparative Research Programme on Poverty in the early 2000s, and in 2012 he was appointed UCT's pro vice-chancellor for poverty and inequality.

“In a strange way,” said Jacobs, “UCT has been privileged to host Wilson as a migrant worker for 30 years”. 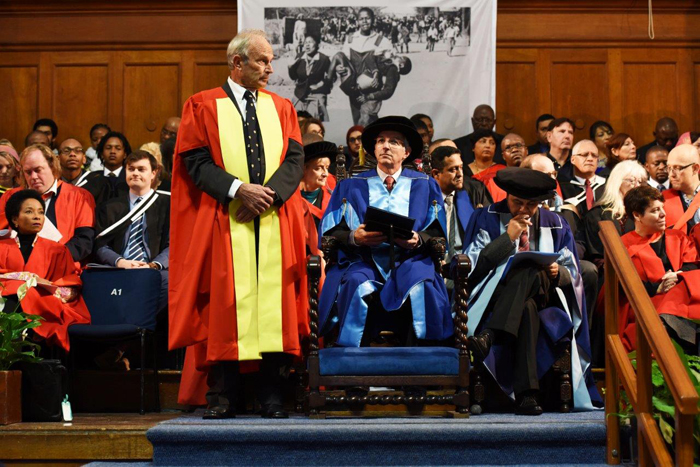 “Rhodes Must Fall,” began Wilson's address to the graduands. One “simple, non-violent but highly symbolic action not 200 metres from here” had managed to move the debate from focusing on apartheid and the post-apartheid state to tackling the legacy of colonialism itself.

“Despite being a major benefactor of UCT, the bottom line is that Cecil Rhodes is the most potent symbol of British imperialism,” said Wilson. Rhodes embodied the exploitative migrant labour system that uprooted workers, who were forced by the Glen Grey Act to earn wages to pay tax, and caused massive poverty in the communities they left behind.

One glance at maps of the geographical distributions of poverty in South Africa shows that most of the poorest areas were former Bantustans – 'homelands' that the apartheid government had confined black South Africans to, with disastrous consequences for the majority of the population.

This was no accident, said Wilson.

“The growing economy generated poverty in the areas that the miners came from,” said Wilson, while at the same time it generated wealth in the cities for the privileged few.

If you add the Colour Bar Act of 1893, the Natives Land Act of 1913 and the fact that compulsory formal primary education for white children was instituted 100 years earlier than for black children into the mix, it becomes clear that the system was geared towards profiting from the oppression of the black majority.

“There is much we wish to change in our past, but the arrow of time moves in only one direction.”

In 1993 unemployment was at 33% for those who were still looking for work, plus those who had given up. For the black population, unemployment was more than 60%, said Wilson. And while poverty has decreased a little since then, inequality is deepening. This is what Wilson called “the seismic fault” in South African and post-colonial society.

Wilson illustrated his point with a quote from Frantz Fanon's The Wretched of the Earth:

“The fundamental duel which seemed to be that between colonialism and anticolonialism, and indeed between capitalism and socialism, is already losing some of its importance. What counts today, the question which is looming on the horizon, is the need for a redistribution of wealth. Humanity must reply to this question, or be shaken to pieces by it.”

At all costs, said Wilson, buildings and schools should be protected from being burnt down in anger by frustrated students. But the anger needs to be acknowledged and its causes need to be removed, he added.

“The mess that we've inherited must be tackled head on …. As a Russian revolutionary said, we must have our hearts on fire and our brains on ice.”