The nation commemorated Human Rights Day on 21 March – a day that for many embodies the brutality of the apartheid regime, and its police force in particular. Yet two decades since democracy was won, incidents of violent and often deadly clashes between South Africa's police and ordinary people, particularly during times of political protest, continue to haunt the country. Monday Monthly explores the history of policing and public protest in South Africa, to try to understand why the trend continues.

It was on 21 March 1960 that apartheid–state police opened fire on a PAC-led march against the pass laws outside the Sharpeville police station, gunning down more than 200 people, 69 of whom were killed.

That date has since been commemorated in various forms; first as Sharpeville Day, then Heroes' Day, then Freedom Day, until the name was officially changed to Human Rights Day in 1995, "which means nothing, really", argues Dr Thiven Reddy of UCT's Department of Political Studies.

But police–versus–citizen violence has made headlines in the country recently, with high profile cases sparking furious public debate, such as that of community leader Andries Tatane, who was shot dead by police in a so–called 'service delivery' protest in Ficksburg in 2011, and the massacre of mineworkers at Marikana the following year.

What is it about the South African socio–political landscape that leads to such frequent violence between an arm of the state and the people it serves? 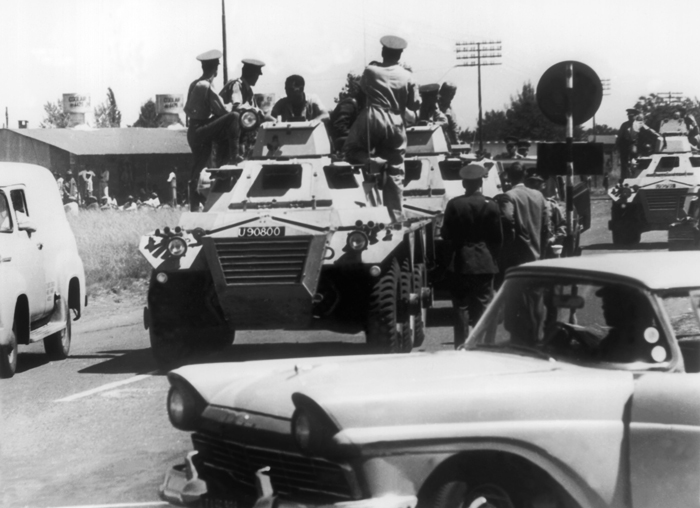 Political protests: present and past

Writing about Marikana, Andrew Nash, associate professor in UCT's Department of Political Studies, says that South Africa has had its share of massacres. "But," he adds, "this one differs from all the others in that it is our first 'democratic' massacre — the first time a democratic government has approved a massacre of black workers who fought for the overthrow of apartheid and voted the ANC into power; the people for whom they are supposedly providing a better life."

While Sharpeville was a watershed for South African policing, the Soweto uprisings were the real game–changer, says Reddy. The Soweto demonstrations were organised by young people who objected to the apartheid government's Bantu education system, which required students to learn in Afrikaans, regardless of their mother tongue.

"[Soweto] introduced the young kid with the stone and the petrol bomb willing to target symbols of oppression," says Reddy. That modus operandi of political protest continued through the 1980s, and there was a lull in the 1990s — but now it's back, he says. Guy Lamb, director of UCT's Safety and Violence Initiative, agrees.

Sharpeville involved an organised crowd that marched on a police station, with police allegedly feeling besieged and opening fire with live ammunition, killing dozens of the marchers. Soweto was different, says Lamb, because it involved a huge and agitated crowd, with police who had no specific training in crowd control. The ensuing chaos was hugely embarrassing for the police force, and sparked a realisation that they would have to 'do things better'.

"I don't think there was a particular concern for the people who had been killed, but the concern was [that the police] looked like they were incompetent," he says. "That's when you saw an increased militarisation, focused on counter–insurgency and those sorts of things." 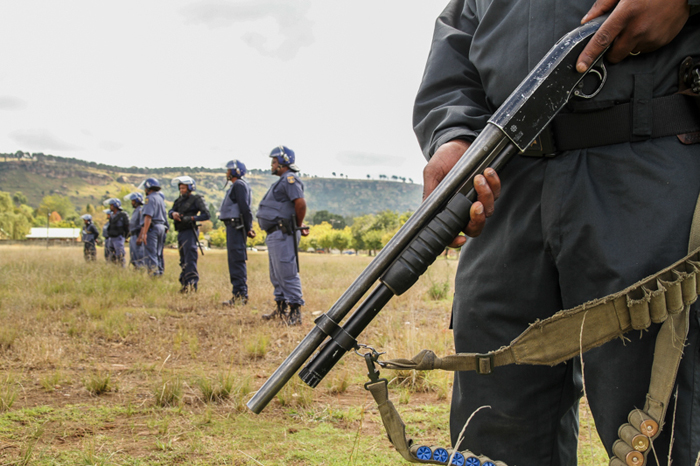 Where political protests used to have a "human rights element" about them, the discourse now is "zero tolerance", says Reddy.

"There are global patterns regarding policing, repression and violence," Reddy observes, pointing to the United States and European governments, who appear to be leading the 'zero tolerance' policy.

There's an increase in what the police call 'public violence', says Lamb. When a community protests and burns tyres, these expressions are typically labelled 'service delivery protests', but they're not always about service delivery per se, he adds.

Lamb recalls a statement made by one of the interviewees in a study called 'The Smoke That Calls', by the Centre for the Study of Violence and Reconciliation: "If we protest and burn stuff and destroy stuff, someone will come and listen to us."

"So there's the sense that we'll only get attention if we do this," he says. But from the police's perspective, what do you do when you're at this coalface, and people are throwing stones at you and (in some cases) firing shots at you?

But Marikana showed that serious and careful thought needs to go into how one polices crowds, he adds.

Reddy notes a "false dichotomy" between the apartheid state and the democratic dispensation. It is too simplistic to view everything the apartheid state did as 'bad' and therefore view the actions of the post–1994 government as necessarily the opposite.

Government has been put in a contradictory position, Reddy argues; it wants to claim the struggle history against repression, yet it behaves like "every other state" in violently repressing dissent by its citizens.

It is ironic that the ANC's rhetoric around state–sponsored violence has become "justificatory, dishonest", and undermines "certain fundamental values of a free society, [one of] which is that a democratic state must not kill its citizens!" Reddy says.

"It's a slippery slope of morality."

So we have moved from the fraught society that was apartheid to a democratic one marred by endemic corruption and elites indulging in self–interest, often at the expense of ordinary people.

"Politics becomes about means and ends. This is not what you want to build a strong society on."

South Africa is a society filled with pathologies and contradictions.

"I don't think it's unique to South Africa. These contradictions are part of every society," says Reddy. "It's just in South Africa we see it [manifested] in incidents such as Marikana, in taxi violence, in two people fighting on a roadside." 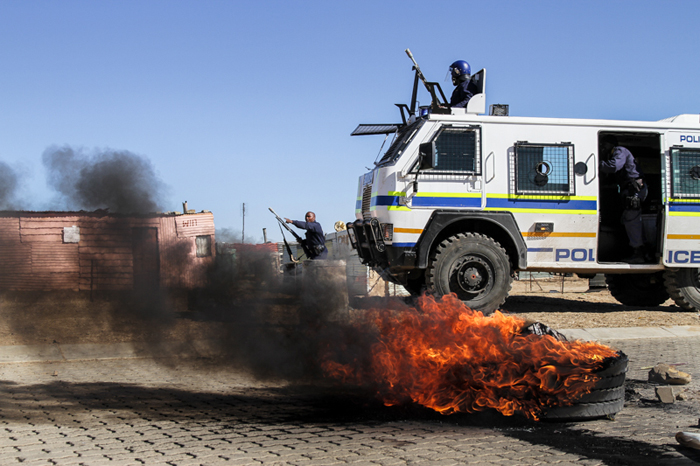 "There's a difference between 'militarised' and 'militarist'," he continues. "If you trace the history of the police back to when the first organised police happened, it was from colonial intervention, and the police were effectively a quasi–military body that were deployed to the borders of the colony, or the frontier, to police; because that's where there were other societies or people who were opposed to colonial intervention."

"South African police have always been hierarchical; centrally managed, and incredibly top–down," Lamb says. That brought certain traditions, which have manifested in the police adopting military ranks and the use of paramilitary–type equipment, for example.

"In the United States at the moment you see a very clear trend towards paramilitarisation, specifically in the way in which police are dressed, the way in which they are armed, and the way they interact with people," Lamb says. With the South African police, this militarisation is less clear–cut.

"The history here is, you have a police [force] that was highly militarised in the seventies and eighties."

Democracy heralded an attempt to make cosmetic changes to the militarised aspects of the police, with the military ranks being abandoned and the name changed from 'police force' to 'police service'.

The South African Police Service reverted to its original military rank structure in 2010; which, SAPS said, would improve discipline, "with the ultimate inference being that it will enable the police to deal better with the high crime levels that are bedevilling communities", as Joey Berning and David Masiloane wrote in the South African Journal of Criminology in 2011.

"They didn't really police crime," says Lamb about the apartheid police in black areas. "They policed resistance against apartheid, essentially to police that political struggle. They weren't really interested in crime."

Though there have been attempts since 1994 to forge links between communities and the police, the hierarchical ethos remains.

A change that was noticeable was when Jackie Selebi became Commissioner of Police.

"The change from having professional police running the police to political appointees coming in as civilians — but parachuted in, not understanding the policing organisation — has, in a way, politicised the police.

"Often the police have been doing the bidding of the ruling party, and that's been kind of obvious in many respects; Marikana is obviously one of the key cases of that [happening]."

With that came an even stronger militarisation of the police, and the belief that crime could be solved with force.

"We're seeing this militarisation largely around the policing of crowds," adds Lamb. 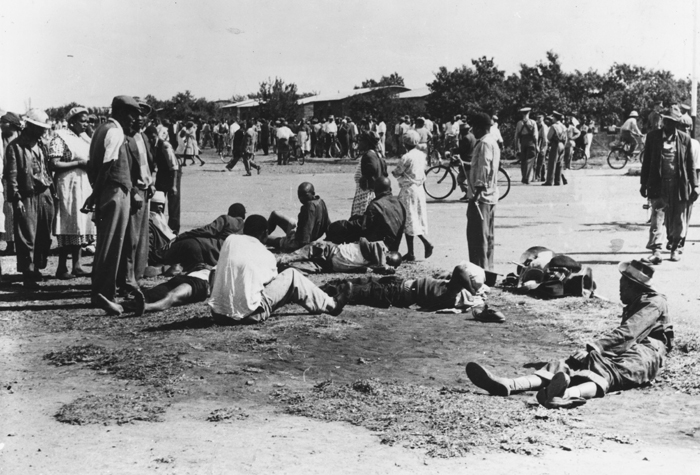 Somewhat ironically, the police maintain that sending the military in to fight gangs in townships is "the worst thing you can do — and that's my view as well", says Lamb.

"It's interesting in terms of militarisation towards the policing of agitated crowds, in that [the attitude is that] we have to subdue them, we have to repress the threat; and in the case of gangs, there's a realisation that the military option is not going to work here. We need to think of creative ways of doing this.

"Militarisation does exist; the ethos is there. But how the police address problems is not always militarised."

Is there another way?

The Swedish police, for example, use a different model, which lends itself to less lethal outcomes. They have specific police officers who deal with strikes, by trying to establish contact with strike leaders and looking at ways of preventing the situation from escalating.

"But sometimes the arrival of the police on the scene escalates it," cautions Lamb.

Closer to home, the Khayelitsha Commission has benefited parts of that community already, reports Lamb. Upon the conclusion of the commission, a new station commissioner was appointed for all three stations in the crime–stricken community.

Lieutenant–General Johannes Jacobus Brandt immediately made contact with civil society organisations such as the Social Justice Coalition, and resolved to find ways to implement the commission's recommendations.

"He's now got a really good team together,and has decided that 'we need to do something about this'." Lt–Gen Brandt also approached academia for help, and on the recommendation of a subsequent UCT study, the Department of Community Safety now funds Khayelitsha's local 'peace committees', which are extra–state bodies that try to solve potential flashpoints in communities before they need to be taken to the police.

This is very much a community–driven way of reducing crime, says Lamb.

"For me, here, it is about a different style of policing. It's not all about beating people into submission and using aggressive policing. It's about saying, 'we're here, we acknowledge there's a problem, and let's do something about it'," Lamb says.

The attitude, then, is about trying to solve the problems in a very poor community that suffers from a lot of crime.

So it's entirely possible to exploit the hierarchical ethos in the police to find less aggressive ways of managing crowds, too, says Lamb.