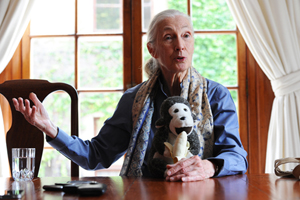 Goodall delivers flagship lecture
Just two months shy of her 80th birthday, chimpanzee researcher and activist Dr Jane Goodall visited UCT in February to deliver the first Vice-Chancellor's Open Lecture of the year, this to a packed Baxter Theatre Centre. These lectures provide a vital interchange between the university and the community; opportunities to hear first-hand from renowned academics, researchers and innovators. Prior to this, Goodall addressed the Cape media on campus, providing insights into her extraordinary life, centred on her research among the chimps at Gombe Stream National Park in Tanzania. She now travels the globe, working some 300 days a year, to rally support and funding for her vision, a bigger plan to address human need and the ecosystem. 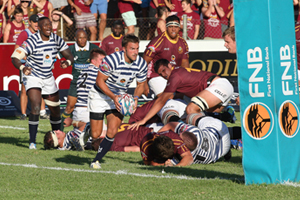 Derby delight:
Liam Slatem, captain of the FNB UCT rugby team, lines up a box-kick under pressure against Maties on 10 February. It was an historic day for the Ikeys at the Danie Craven Stadium as they outclassed arch-rivals Maties 33-16 in the 2014 FNB Varsity Cup. Having last bested Maties in the inaugural tournament in 2008, UCT made their intentions known early on with a powerful scrum that had the hosts back-pedalling. Two tries from Ikey flanker Jason Klaasen and one each from Lihleli Xoli and Slatem did most of the damage, while flyhalf Dean Grant – a former Matie – kept the scoreboard ticking over with three conversions and two penalties. The win leaves UCT in fifth place going into round three. The Ikeys take on the Nelson Mandela Metropolitan University's Madibaz in Port Elizabeth on 24 February. 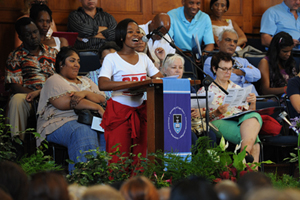 Back to school:
Freshers' parents listen intently to SCR president Nommangaliso Gondwe's address during the orientation programme for out-of-town parents and guardians. This year UCT hosted 3 200 parents, the largest number to date, at its two parent orientation sessions, which familiarise parents with the UCT environment, and help them understand some of the academic and social experiences their children may encounter at UCT. The group of out-of-towners was so large that they had to be accommodated in two venues, Jameson Hall and the Beattie lecture theatre. Vice-Chancellor Dr Max Price emphasised parents' special responsibility towards students and urged them to keep the lines of communication open: "...so that they can come to you when they are struggling and you can encourage them to seek help". 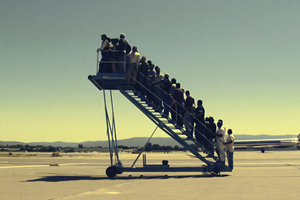 Runway to nowhere:
This picture, from Albanian artist Adrián Paci's 2007 video Centro di Permanenza Temporanea, forms part of the When Oceans Meetexhibition at the Michaelis School of Fine Art, on view from 27 February to 5 April 2014. Translated the title means "centre for temporary permanence". It illustrates the reality and predicament of illegal Latino workers seemingly waiting to be deported at a Los Angeles airport. The two-part exhibition attempts to establish a wider dialogue around some of the issues that local communities in Cape Town face. This installation is loosely linked to Dr Siona O'Connell's exhibition, Spring Queen – The staging of the glittering proletariat, which highlighted the plight of Cape Town factory workers. Centro will be screened from March 27 to March 29. 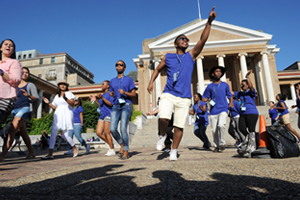 Fresh start to 2014:
UCT's campuses have been crawling with fresh-faced first-years since 27 January, when the first Orientation programme for new students kicked off. The blue t-shirts pictured are worn by enthusiastic orientation leaders from the Faculty of Humanities, who welcomed the greenhorns with song and dance on the Jameson Plaza. The colourful gear reflects the excitement the orientation period brings, as students absorb an abundance of tips about how to negotiate a potentially challenging university career. From campus and library tours to curriculum advice and pep talks by Campus Security Services, the 4 735-strong class of 2014 was given a comprehensive introduction to life at UCT.