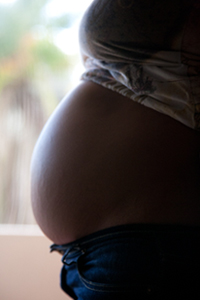 While teenage pregnancy in South Africa is often painted with a single brush-stroke - disruption to the education of female learners - it has many other negative consequences that are not often explored in the mainstream media. One of these is the effect of such a pregnancy on the mental health of the teenager. Research has shown that teens are twice as likely to suffer from postnatal depression as women who have their babies at a later stage of life.

According to Simone Honikman, the director of the Perinatal Mental Health Project (PMHP) - an initiative based at UCT - pregnant teenagers are doubly at risk of mental health disorders before and after the birth. Furthermore, mental disorders that appear in adolescence are more likely to persist throughout adulthood. Teen mothers are also twice as likely to fall pregnant again. 49% of adolescent mothers fall pregnant within two years of their initial pregnancy. The likelihood of a subsequent teenage pregnancy nearly doubles when the young mother is depressed.

The PMHP advocates for, and facilitates, the incorporation of mental health care into maternity care, as pregnant teenagers are particularly vulnerable to coercive and abusive relationships, physical or sexual abuse, and high-risk sexual behaviour. On a more positive note, the research also shows that teen pregnancies have dropped since the 1980s, and that teen moms who return to school are highly motivated to complete their studies.

Studies by UCT's Southern African Labour and Development Research Unit (SALDRU) have shown that teen childbearing has decreased from 30% in 1984 to 23% in 2008. This indicates that the country has one of the lowest teenage pregnancy levels in Southern Africa. SALDRU's findings have been supported by similar studies undertaken by both governmental and non-governmental agencies. Also, the proportion of young teens (under 17 years) giving birth has decreased, with young women aged 18 and 19 accounting for the majority of teen pregnancies. Only 5% of children were born to young teens in 2008 compared to the 13% in 1984. Stats SA's General Household Survey for 2012 indicates that 4.5% of girls 13-19 years old were pregnant in 2010.

Teen pregnancies in rural areas were higher than in urban areas, with a study by Ibis Reproductive Health noting that 14% of rural teenagers became mothers compared to 11% of urban teenagers. A 2011 study by Sisa Ngabaza from the University of the Western Cape found that despite the decline in teenage pregnancy throughout South Africa, rates are still high in the more rural areas.

Teen pregnancies are more common among black and coloured girls than white and Indian girls. A 2009 study commissioned by the Department of Basic Education found adolescent fertility rates according to race to be the following:

This study also found that the white and Indian fertility rates among adolescents come close to those of developed countries.

In South Africa, approximately one third of teenage mothers return to school. However, it is not always the pregnancy that leads young mothers to curtail their schooling. The 2011 South African General Household Survey found that among 7- to 24-year-olds who were not attending school, pregnancy was the reason in 2,3% of the cases - compared to lack of funds accounting for 35,9% of the cases of individuals abandoning their studies. This, together with findings from other studies, led Samantha Willan from the University of KwaZulu-Natal to come to the conclusion that the â€œprimary reason for teenage girls leaving school is usually economic, and not due to pregnancy or motherhoodâ€.

Of those girls who return to school, only 34% complete matric. Furthermore, SALDRU found on average that â€œTeen mothers [compared to non-mothers] lag two thirds of a year behind their peers; are 25 percentage points more likely to drop out of high school; and are 20 percentage points less likely to matriculateâ€.

Black girls (60%) are more likely to return to school than coloured girls (35%). Girls are more likely to complete schooling if they conceive in Grade 12. The younger the teen mother is, the more likely she will not return to school; and the longer a girl stays away, the less likely she is to return. Studies all agree that family support, most specifically from the teenager's mother, largely determines whether a teenager returns to school after the birth of her child.

Once she is at school the main motivation for completing school comes from the teen mother herself. Teen mother respondents reported that education is the key to a better future for them and their children. This goes against the commonly-held view that teenaged mothers are unwilling to finish school.

Willan, in her analysis of research regarding teenage pregnancy, states that teenage pregnancies are unplanned in most cases, but despite this, pregnancy need not disrupt a girl's future if she receives support (childcare, emotional and financial) and the right interventions.