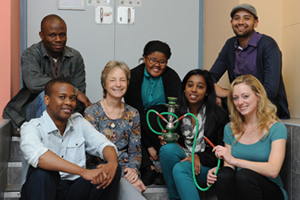 It's a centuries-old Eastern practice that's gained worldwide acceptance in recent years. But the water filter and fruity flavours of the hookah pipe, or hubbly bubbly, mask a toxic cocktail of compounds.

These are nicotine, carbon monoxide, formaldehyde, polyaromatic hydrocarbons, arsenic, and lead. Insufficient knowledge about the dangers of the hookah has spotlighted an urgent need for school and university health-promotion campaigns - and better regulation of hookah pipe smoking. This is the recommendation of a group of UCT fourth-year MBChB students, working with the university's School of Public Health and Family Medicine, who conducted a study among the faculty's health sciences students.

The project was identified by the Cancer Association of South Africa, and the findings were published in the November edition of the South African Medical Journal.

"There is a perception that the use of the hookah is rising, and it's seen in the community to have minimal health risk," said senior lecturer Dr Virginia Zweigenthal. "As health sciences students are future health practitioners, their perceptions and practices are important; hence, they were selected for this study."

Of the 228 participants, 66% had smoked a hookah pipe before, with 18% still smoking. Most began smoking in high school, with 25% initiating at university. Of the current smokers, 65% smoked socially occasionally, commonly at friends' houses, for 30 to 60-minute sessions. A further 11% smoked cigarettes concurrently, and a further 30% had added other substances, mainly cannabis, to pipes. Most current hookah pipe smokers (84%) had no intention of quitting. Only 30% had prior health information about hookah pipe smoking. Most knew it was harmful (91%), but did not know why. Some 80% of the participants said the practice is socially acceptable; and 84% would recommend it.

The study also found that the average hookah-smoking session is longer than for cigarettes, and involves exposure to larger volumes of smoke.

"Studies investigating the acute and long-term effects of hookah pipe smoking show that there is a risk factor for lung cancer, periodontal diseases, cardiovascular disease, and adverse pregnancy outcomes," the paper said.

"Thus, while hookah pipes are commonly perceived to be safer then cigarettes, they may be even more harmful."

The group also found that peer influence is a significant factor in initiating users.

The South African Tobacco Control policy may prohibit smoking in public places, but hookah pipes have eluded its reach. A study done at another local university showed a large proportion of students smoked on campus. However, it's thought that UCT's strict tobacco-usage policies have deterred the use of hookahs here.