Smoked: does the province stand a chance? 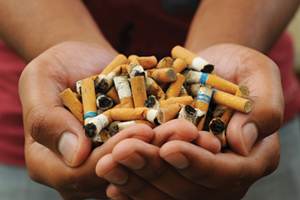 Mymoena Abrahams* is a solitary figure in the front row of chairs at Groote Schuur Hospital's Smoking Cessation Clinic. Swathed in a black headscarf, she sits upright, gripping her handbag tightly. Abrahams started smoking at 17; and 40 years later, she says she's quitting.

"It's bad for my health," says the 57-year old from the Cape Flats, where tobacco use among the coloured population is the highest in the country - and in the world.

She smiles wryly. "My dogter skel my."

She's always known cigarettes are bad for her. Still, she was shocked by the lung capacity test results revealed by the Respiratory Clinic at GSH, home to the Smoking Cessation Clinic.

This is Abrahams' third visit to the modest facility, run every Thursday since it opened in November last year. The clinician she sees has prescribed medication to reduce nicotine cravings. The state doesn't pay (and neither will most medical aids), but the clinical and emotional support for people trying to quit is worth the visit, says Abrahams.

The clinic is thought to be the only one in the province since the facility at Tygerberg Hospital closed, says Dr Richard van Zyl-Smit, head of the Lung Clinical Research Unit at the UCT Lung Institute, and consultant pulmonologist in the Division of Pulmonology and Department of Medicine.

The number of smokers who come here is still low (they will see only those who are serious about giving up), but Van Zyl-Smit believes that support is essential to reducing what provincial health minister Theuns Botha calls "avoidable health burdens on the state".

"We don't employ 'bad boy' methods," says Van Zyl-Smit. "We model our approach on five 'A's - a similar approach to programmes for alcoholism."

The team draws up a support programme for each smoker, and prescribes medication if needed.

Writing in the latest edition of the South African Medical Journal, Dr Brian Allwood, also of UCT's Division of Pulmonology and the Lung Institute, says it's estimated that smoking cessation before age 45 adds an average of nine years to a person's life.

The broader picture, Allwood says, is that cigarettes kill over six million people a year, almost twice as many as from HIV and TB together. Smoking is also associated with the world's top five causes of death: ischaemic heart disease, stroke, chronic obstructive pulmonary disease, lower respiratory tract infection and lung cancer.

"It's estimated that without tobacco, one-third of all cancer deaths would be avoided."

Tobacco use highest in coloureds

Cases like Abrahams are all too common in the province. The group classified as coloured has the highest smoking prevalence in the country, reports a paper by the Medical Research Council's Dr Debbie Bradshaw, penned with collaborators at the South African National Health Laboratory Service and the Universities of Sydney and New South Wales.

Smoking-related mortality among coloureds is 50% higher than for white or black smokers and ex-smokers. And for diseases exacerbated by smoking, the smoking-attributed fraction is also much greater for coloureds. It's not a new finding; but it points to a pervasive problem that isn't diminishing, and is adding a burden to state health care.

"The substantial hazards already seen among coloured South Africans suggest growing hazards in all populations in Africa where young adults smoke now," the paper's authors report.[confirm this is what it says? Sounds odd]

In addition, information available to researchers is clearer now, thanks to reforms in South Africa's death certification reporting. In 1998, South Africa became the first country to ask about smoking history in routine death notification.

There are several issues smokers grapple with, says Van Zyl-Smit: lack of facilities with trained staff and the time to counsel patients, and lack of support and medication for state patients.

"There's nothing in our healthcare system that helps people to overcome nicotine withdrawal when trying to quit." 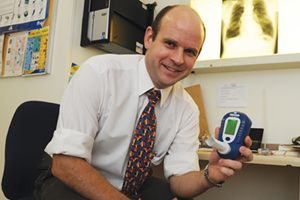 Key steps in smoking cessation include:

"Stopping smoking is not easy, as the habit and associations with smoking - stress, alcohol, etc., as well as the physical addiction to nicotine - are significant obstacles," says Van Zyl-Smit. "The benefits of quitting are enormous; and thus, multiple options should be considered to assist the individual to break a habit that they have a 50% chance of dying from."