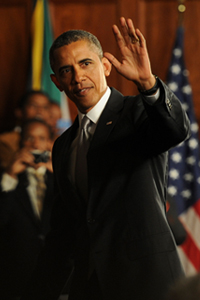 Obama waves to the crowd at Jameson Hall on a chilly Sunday afternoon last month.

When US President Barack Obama took the podium at UCT last month, he was walking in the decades-old footsteps of slain American senator Robert Kennedy, who made his famous Day of Affirmation speech on the campus in 1966. But, coming to a very different South Africa, Obama's impact is likely to take on a different shape and timeframe, say experts.

According to Professor Don Ross, dean of the faculty of commerce at UCT, "President Obama's focus on the challenges, responsibilities and opportunities for Africa's young people is accurate and welcomed." And, he adds, the long-term consequences should not be overlooked.

"The fact that President Obama spoke the words he did here is a fact that can be used to emphasise the unique responsibilities of and opportunities for UCT students, for years to come. After all, we are still invoking the words Robert Kennedy pronounced here almost 50 years ago. We'll be remembering and drawing inspiration from President Obama's encouragement for at least a similar frame of time."

For Dr John Akokpari, senior lecturer in UCT's Department of Political Studies and an international relations expert, Obama's visit to UCT reified the university's status as one of the top universities in Africa.

"Obama spoke about things such as good governance, which is very important in a country like South Africa," he added. Dr Max Price, Vice-Chancellor of UCT, spoke ahead of Obama at the event in Jameson Hall on 30 June.

He said, "President Obama's visit to South Africa is rich in symbolism – and this is likely one reason he chose to speak at the University of Cape Town. I suspect his choice of a university platform is also directly related to the more explicit goal of his visit, namely to promote economic relations between the USA and the African continent, in ways that buoy the trajectory of economic growth." 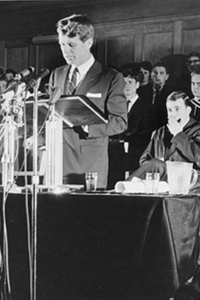 Kennedy addresses the campus community with his famous Day of Affirmation speech.

While US President Barack Obama's visit to Africa and UCT could have long-term policy impacts for the continent, former student leader Professor John Daniel believes the effect of Senator Robert Kennedy's visit to UCT was felt more immediately.

Kennedy, a US presidential candidate at the time, visited UCT on 6 June 1966 to address members of an anti-apartheid movement that was growing increasingly weary, says Daniel. Daniel was vice-president of the National Union of South African Students (NUSAS) at the time, and was part of the organising committee that brought Kennedy to South Africa.

"I think it had a very powerful short-term effect," relates Daniel. "What it did was to basically revive the sense of morale of the anti-apartheid forces. 1966 was a very bad time. It was only two years after Nelson Mandela and all the other ANC leaders had been sent to prison. The ANC was banned; people were going into exile.

"The government seemed at its most powerful, and here was this leading person who came and he revived the spirit of the resistance." Kennedy's visit also reminded Daniel and his fellow student activists that they were not struggling in isolation, and were indeed sending forth the "ripple of hope" that Kennedy mentioned in his talk.

"It reminded us that the rest of the world was behind us and supported us; it lifted the morale, and revived the strength of NUSAS at the time. So, the short-term impact was much greater than the long-term impact."

The size and passion of the crowd that gathered to listen to Kennedy's famous Day of Affirmation address was a pleasant surprise for Daniel. "I think the overwhelming impression I have was of the incredible enthusiasm of the crowd and the size of the crowd," he said. "We weren't sure what kind of reception Kennedy would get. We knew that the visit was very unpopular with the government, who had done their best to stop it, so we weren't exactly sure what kind of reception we would get.

"We were absolutely overwhelmed with the enthusiasm, with the size of the crowd, and the sense of euphoria that this person had brought to South Africa."

That euphoria came at a price for Daniel and his comrades, however. Ian Robertson, who was NUSAS president and also central to organising Kennedy's visit, had been banned for five years by the apartheid government on 11 May 1966. Daniel says this was an attempt by the National Party government to dissuade Kennedy from visiting.

"They knew that Kennedy had presidential ambitions, and they believed that banning the person who invited him, under the Suppression of Communism Act, might persuade Kennedy not to come and be seen to be associated with a so-called communist.

"Of course, it had the opposite effect. It made him even more determined to come – and of course, the first thing he did once he arrived in Cape Town was to go and see Robertson, who was then living under restriction and who then made a presentation to him.

"So it was negative in that sense, but Robertson obviously left the country soon after that and had a very successful academic career."

Daniel himself was forced into a 23-year exile in 1968, after having his South African passport rescinded.

Enlarge the reach of science through all our languages Only two of South Africa’s national languages are fully able to scientifically describe Africa’s rich hominin fossil and palaeontological history – this needs to change. 30 Sep 2020