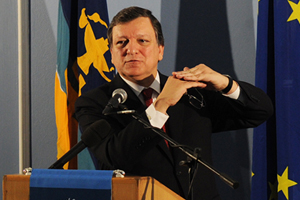 Afro-optimist: José Manuel Barroso, president of the European Commission, addresses a UCT audience after trade talks at an SA-EU summit in Johannesburg.

"The mood in Europe towards Africa is changing."

This statement was made by José Manuel Barroso, president of the European Commission, on a recent visit to UCT. Barroso was responding to a question on relations between the European Union (EU) and the African Union (AU).

He stopped over at the university one day after attending the SA-EU summit, which took place in Johannesburg on Mandela Day. His audience mostly consisted of UCT master's students studying politics.

"There is a new confidence in Africa in terms of economic opportunities. Europe, when looking at Africa, no longer thinks merely of development assistance. It is also considering joint opportunities for mutual benefit. We believe the continent has great potential," he said.

He pointed to an upcoming EU-AU summit next year as proof of increasingly closer relations between Africa and Europe. "Those from the African Union studying regional integration are inspired by our experience of regional integration ' We from the EU try our best to support AU capabilities to enable Africans to solve its own problems."

Barosso, who spoke of his deep admiration for former president Nelson Mandela, fielded many questions from the audience. According to Dr Max Price, UCT vice-chancellor, Barosso was comfortable in an academic setting because of his background in academia.