Missed out on UCT's December graduations? 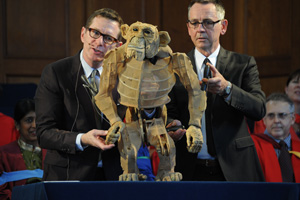 Going ape: Basil Jones and Adrian Kohler - with 'chimp' Peter - did a show on fracking, shortly after Dr Jones and Dr Kohler received their honorary doctorates from UCT.

Fear not. Thanks to UCT's YouTube channel, all graduation ceremonies can be viewed over and over again, or for as long as your enthusiasm and bandwidth lasts.

Highlights include a puppet show by UCT graduates Basil Jones and Adrian Kohler, the puppeteers behind the acclaimed Handspring Puppet Company, as well as recipients of honorary doctorates over the December graduations. Their skit featured the eerily-lifelike 'chimpanzee' known as Peter, and tackled the issues of mining for shale gas - using a technique known as fracking - in the Karoo.

Jones and Kohler received their honorary doctorates in literature at the evening' ceremony on Saturday, 15 December, as did world-renowned painter Marlene Dumas, who was presented with a Doctor of Fine Arts degree.

Viewers can also catch the talk by businessperson Maria Ramos, who spoke at the Faculty of Commerce's morning ceremony on 14 December.