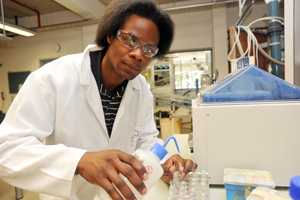 Help from my friends: Chemical engineering graduand Joel Bombile arrived in Cape Town from the DRC several years ago with little English and few resources.

When Congolese student Joel Bombile arrived in Cape Town a few years ago, it was with a head full of dreams and a vision of making a new life for himself. Apart from that, he had precious little.

He had almost no English, and even less money. Become a chemical engineer, one of the toughest degrees on offer at UCT? It seemed a pipe dream.

Shortly after arriving in Cape Town he joined an institution specialising in teaching English to non-English-speakers. He was only able to study for a month or so, however, before having to leave because of a lack of funds.

"But I listened to the news all day long, and read as much as I could. I finally registered to write the Test of English as a Foreign Language (TOEFL), and managed to do well enough to be considered for admission to UCT."

He remembers sitting in his first lecture, struggling to make sense of what was being said.

"My performance in the first semester of my first year suffered terribly because of language problems, but I was determined not to apply for extra time for the class assessments.

"I remained every day after class, studying in the basement of the chem eng building."

He received plenty of encouragement and support from Professor Duncan Fraser, who delivered the first course he completed at UCT, and was also helped and guided by Professor Jenni Case while seeking financial support from the university.

"I have particularly enjoyed the support and friendship of Professor Peter Meissner and his family, who I met in my second year," says Bombile.

Having matriculated as the top student in DR Congo in 2006, he says he is obsessed with the idea of making a difference in the world through research.

He plans to study for a PhD in chemical engineering over the next few years, and is particularly interested in nanotechnology.