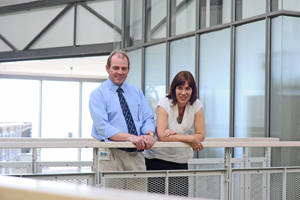 Chemical engineering is graduating its highest-ever number of students this year, close on 100; 25 more than last year, and 43 more than the year before.

Head of department Professor Jack Fletcher says one of the main reasons for this is that in 2009 the faculty enrolled a very large first-year class, of 160 students. This was partly due to the new admission criteria set for the new National Senior Certificate examination, and not having good benchmarks to work with at that stage.

"In other words," he says, "in 2009 we significantly overshot our target intake."

Another important reason for this large graduating class is that the department has been steadily improving students' success rates. Chemical engineering is arguably one of the university's toughest degrees.

"Of the 2009 intake to the mainstream programme, 44% are graduating this year," Fletcher adds. "This compares very well to our historical throughput in minimum time, which has been in the order of 30 to 35%."

Colleague Professor Jenni Case says that over the past few years a number of measures have been introduced to help students succeed. These include a successful first-year mentoring programme, a first-year class camp and a second-year field trip.

The large graduating class of chemical engineers is not only good for UCT, but also good news for the country, says Fletcher.

"UCT chemical engineering graduates are very highly regarded in the country, in both industry and commerce, and this cohort will go out to play a key role across a range of sectors."

He adds: "For a number of years now, black students have been in the majority in our graduating class; and this class continues that trend. Given the size of the class, we have noted proudly that we are the largest 'producer' of black chemical engineers in the country."