Measure success by what you do, says alumnus 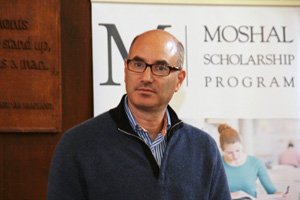 Alumnus and businessman Martin Moshal is a living example of what UCT seeks to achieve - producing graduates who are successful and committed to ploughing back.

In 2009 the Durban-born internet entrepreneur and venture capitalist established the Moshal Scholarship Programme to support promising students financially. The programme has funded full scholarships for over 250 students at universities across South Africa and Israel. The first cohort of students will graduate at the end of this year.

Recently, Moshal returned to his alma mater to attend the first South African Moshal Scholars event, which gave scholarship beneficiaries a chance to interact with one another.

At the event, also attended by Vice-Chancellor Dr Max Price, Moshal enthralled the audience with the story of his rise to success, emphasising the importance of education and urging his scholars to "soak up knowledge like a sponge".

Although success is often measured in financial terms, Moshal believes that "all we can ever own are the good deeds we have done".

"Success should be measured by what you do in the world," he said.