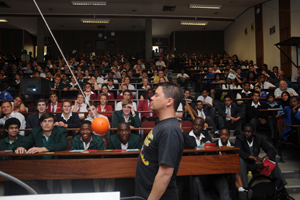 Phenomenal: Dieter Geduld of the Department of Physics performs a demonstration at this year's Phenomenal Physics.

UCT's annual Phenomenal Physics is growing in popularity among many high school learners.

At the most recent fun-filled edition of the event, hosted by the Department of Physics on 24 October, hundreds of grade-11 physics learners from schools across Cape Town savored an array of hands-on experiments and demonstrations.

The purpose of Phenomenal Physics, said Dr Spencer Wheaton, one of the organisers, is to excite learners about the wonders of science, physics in particular, and to recruit future UCT students from the full spectrum of schools in the surrounding communities.

It's working, too. Having attended the event for the past few years, Desmond Visagie, a grade-11 physics educator at Westridge High School in Mitchell's Plain, noted that learners are now begging to come to the event. It's a pity, he said, not all could be accommodated, as a couple of learners from the school - encouraged by occasions such as Phenomenal Physics - have joined the university in the recent past, he reported.

Thembela Sogoni, a maths teacher at Iqhayiya Senior Secondary School in Khayelitsha, which brought learners for the first time this year, believes that the event will make a difference not just for learners.

"One of challenges facing our school is a lack of resources, and bringing learners here opens up their minds and will make them understand physics much easier."