The annual sports awards were presented by VC Dr Max Price and other VIPs in October. Here are the main category winners. 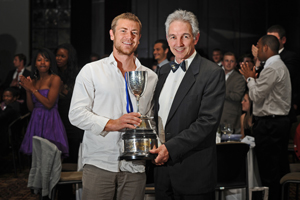 UCT's Sportsperson of the Year for 2012, Joe Mohle, is considered one of the top five climbers in South Africa, ranked high in each of the sport's three codes - traditional Alpine climbing (in which he's No1), sport climbing and bouldering. As each discipline requires unique skills, such a high ranking in all three is rare. Mohle is also the only non-professional climber ranked in the top ten in the world. In January, Mohle was involved in the development of a new sport-climbing venue in the High Atlas Mountains of Morocco, where he also scaled the 4,000m peak of Biguinousssene and the tallest peak in North Africa, Mount Toubhal. 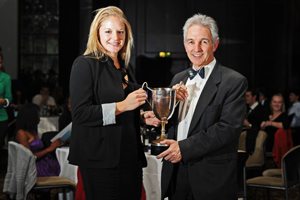 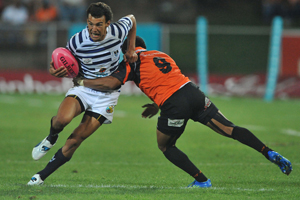 The Ikey Tigers endured a torrid 2012 campaign, surrendering both their FNB Varsity Cup and Western Province Super League A titles. From the ashes of a disappointing season, though, rose one Dillyn Leyds, a first-year student who lit up the Green Mile from fullback. Scintillating showings in the FNB Varsity Cup, capped by seven tries, earned Leyds a call-up to the Western Province set-up, and he established himself as the first-choice No 15 for the Baby Boks in the 2012 IRB Junior World Championships in June. 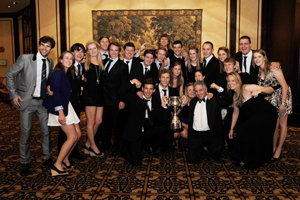 The UCT Rowing Club won the overall-points trophy at the University Sport South Africa (USSA) Sprint Regatta in March, their first triumph in the event since 2002. Fourteen UCT rowers were selected for the national student teams. Six of the UCT crew were also selected for the USSA team who competed at the World Universities Rowing Championships in Kazan, Russia in September. With the re-introduction of the Indoor Rowing Universities Regatta Programme in July, UCT won all four divisions and the overall trophy. The club also beat archrivals Stellenbosch University in all categories at the intervarsity event, and won the overall points standings at the USSA Race Regatta. 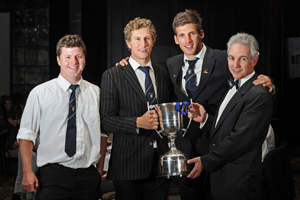 Rowers Leo Davis and Jozef Muller won the silver medal at the World Universities Rowing Championships in Kazan, Russia in September. The heavyweight pair finished 1.16 seconds behind winners Italy after a titanic push to the finish line. So quick was their charge to the finish, their final 500m time was the fastest quarter of any team in the 2km race, and left the likes of Australia, France, Poland and Russia - powerhouses in world rowing - trailing in their wake. (They are photgraphed with coach Brendan Gliddon, left, and VC Dr Max Price.) 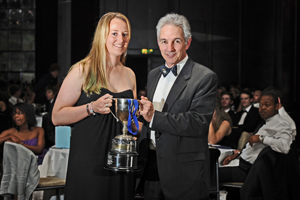 Sarah Bishop has been involved in UCT rowing for more than four years. She has rowed for the women's first eight and has served on the executive committee as women's captain for the period 2009 to 2011. She is currently responsible for the UCT Rowing community outreach programme and coaches 30 learners three times per week at Zeekoevlei. In September 2012 she was elected onto the USSA Rowing Committee as transformation officer. Bishop also served as secretary of the Student Sports Union in 2011 and chairperson in 2012, and serves on the UCT Sports Council.

Club of the Year: Rowing Club 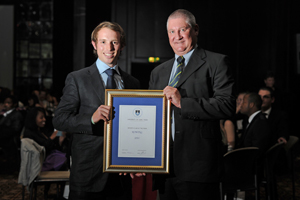 The Rowing Club's twice-monthly or weekly minuted meetings with UCT sports administration ensured smooth and effective governance of the club: it handled a R1.2-million budget with maturity; established an indoor rowing centre and maintained equipment worth R3.5 million; hosted five successful events this year; won the overall university trophy for rowing; was involved in useful community outreach coaching programmes; and raised more than R50,000 through an alumni initiative. (Above: Club president Will Tipping-Woods with sports manager Jonathan Stones.) 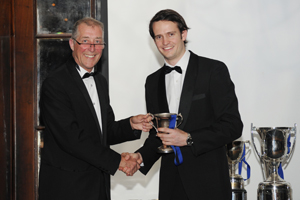 Prof Michael Meadows (left), chairperson of the UCT Sports Council, presented this award to Lorne Hallendorff. As the Students' Representative Council (SRC) sport and recreation co-ordinator and as a secondary member of the Student Sports Union executive, Hallendorff contributed towards many successful developments in UCT sport.