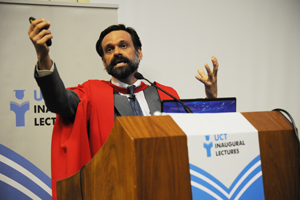 Open access: Prof Jean-Paul van Belle said in his inaugural lecture that open- source software can improve the quality of life in the developing world.

In UCT's Faculty of Commerce, where he heads the Department of Information Systems, Professor Jean-Paul van Belle is known for wearing shorts.

But at his inaugural lecture on 19 September he was in a suit, which neatly fitted his topic, Penguins & Suits: Perspectives on open-source software from a discipline in flux.

In his address, Van Belle argued that open-source software - software that is freely available and grants the rights to use, modify and distribute the code under the same conditions without being discriminatory - should be adopted more widely by society, businesses and individuals.

He believes that open-source software has a big contribution to make in Africa and in the developing world in general, particularly in the BRICS countries (South Africa, with Brazil China, India and Russia).

"Because we are disadvantaged in terms of an existing body of patents, we can use open-source software to build on software without paying for royalties; thus, it is a great platform for innovation," he explained.

The government, he said, spends more than R4 billion per year on software licences, with most of that money going to overseas companies. The adoption of open-source software could divert foreign-exchange flows into the country and bring much-needed macro-economic benefits.

"There is a strong argument for using open-source software," he said.

A director-in-waiting for UCT's Centre for Information Technology and National Development in Africa, Van Belle has been involved in a number of research collaborations that back his viewpoint.

In one case study, when Pinelands High School replaced its intercom system with a computer-based intracom in 2004, the school saved a lot of money; on top of that, they were able to install a PC in each classroom.

Cost-saving seems to be a key driver for many open-source software users, particularly NGOs and small, medium and micro enterprises.

Awareness and technology immaturity were the main barriers, he's found.

Van Belle said open-source software is one example of a larger "open trend" in the world. The introduction of sources such as Wikipedia, Wikimedia and WikiBooks, as well as open-access journals and open data in academia, is a case in point.

"The dream is to have a world in which every human being can have access to information. I think we are getting there. It's a wonderful dream to have, and technology is making it possible."