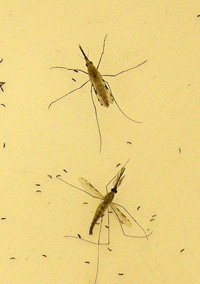 Malaria is caused by a parasite called Plasmodium, which is transmitted via the bites of infected Anopheles mosquitoes, called 'malaria vectors', which bite mainly between dusk and dawn. According to the World Health Organisation (WHO), the parasites multiply in the liver, and then infect red blood cells.

Symptoms of malaria include fever, headache, and vomiting, and usually appear between 10 and 15 days after the mosquito bite. If not treated, malaria can quickly become life-threatening, by disrupting the blood supply to vital organs. In many parts of the world, the parasites have developed resistance to a number of malaria medicines.

Key interventions to control malaria include prompt and effective treatment with artemisinin-based combination therapies, the use of insecticidal nets by people at risk, and indoor residual spraying with insecticide to control the vector mosquitoes.