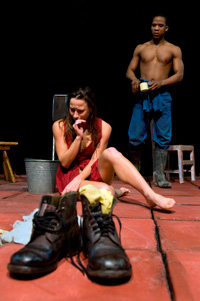 The production, written and directed by the multi-award-winning Yael Farber, scored a series of triumphs at the festival, described as the "the Olympics of the arts world". The play was awarded a Bank of Scotland Herald Angel, which acknowledges the outstanding achievement by performers and productions, and The Scotsman Fringe First, which encourages new theatre writing and translations.

Five-star reviews were received from more than 10 arts reviewers in publications that include The Scotsman, Guardian, London Evening Standard and The Times.

Renowned theatre critics hailed this Baxter adaptation - which moves the action from Sweden to the Karoo - of August Strindberg's 1888 classic, Miss Julie, as "gut-wrenchingly powerful", "the crowning glory of Assembly Festival's superb South African mini-season", and "a pitch-perfect repositioning of the action".

"The reception Mies Julie is receiving at this international festival is tremendous," says an elated Farber, the South African-born director who has made a name for herself across the globe. "This is a very special moment in which - across the board - the work is making its mark. It's a time to celebrate and flourish."